Are IG accounts choosing which posts they want to go viral

Hey what’s up eveyone! I’ve been watching a few accounts lately & noticed that these accounts have
been growing tremendously by choosing which posts they want to go viral. Some only had about 10,000 followers in the beginning & grew almost 40,000 followers in about two months. Not sure if they found a few tricks & loop holes in IG’s new algorithm but they also stay in the top posts category of big hashtags. I dm’d one of the accounts & they even offered me a guaranteed viral post for $100 but did not want to discuss how they go viral. From what I have noticed these accounts are not using powerlikes at all & I don’t think they are using EG’s either. They sell shoutouts as well, but their regular posts goes viral almost everytime & shoutout posts never go viral. They use the same hashtags each time on each post & get tons of views only on regular posts. One of the accounts are: Poweredondiamonds! The image attatched is what they are currently offering. Any ideas on what they may be doing? 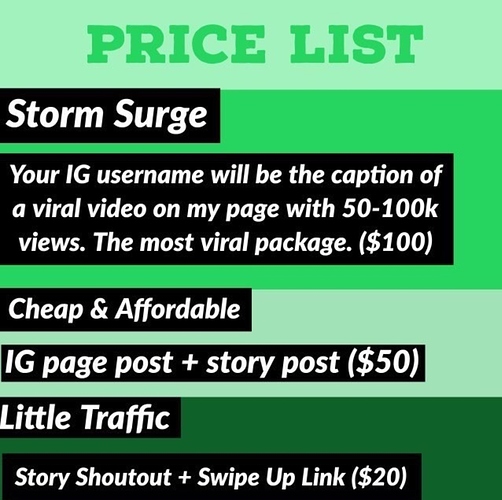 they may have a stockpile of images and vidoes that went viral before and simply reposting it. I seen videos from last year on this week. Very good posts stay good. They have one or two( probaly more) big accounts like it and then its off to the races.

Usernames? I could probably find out what/how they do it or see if it is some kind of loophole

Here are three accounts below. I probably find 2-5 of these accounts per day in the explore page, some with small followings & almost all of their posts go viral.

all three of these accounts do videos mainly and follow many blue accounts, many the same. Take a look at their picture posts, vs videos. Low on pictures - piss poor low liker, videos high views and likes. this tells me they 1. are getting help from big accounts . 2 buying likes and or views. - they should also be much bigger with numbers like they show, telling me fast majorty likes are non-followers. I wish socialblade was still around so I could verify.

Exactly what I was speculating & yes socialblade was a real big help for me as well. Now that I have been watching these accounts they pop up in my explore page everyday & they are ranked top posts in almost all the hashtags that they use. I extracted the likes & comments to see if they have big accounts liking & commenting on each post and a few of them do & a few of them don’t.