My client posted an starbucks ad that supports blacklivesmatter
and look what she got… happened to you before?

crazy stuff man, i guess that’s what Trump was referring to in his last talk about fact checking on Twitter, it seems that it was applied also on IG.

Can you show us the post? Would be interesting to see what could have been triggering this fact check. Of course just when you’re comfortable doing so as it’s a client from you.

This is new…Wonder if the ad is still up 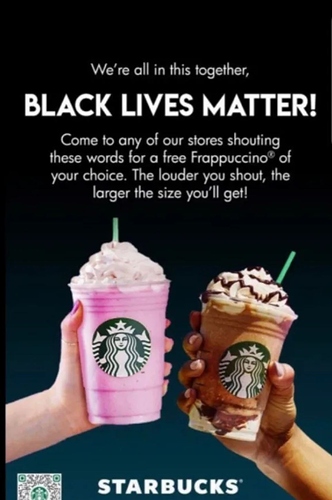 Is it me or does this kinda look like BLM mismaketing by starbucks? What did the conclusion say?

CLAIM: Starbucks has a promotion offering a free Frappuccino drink of choice to anyone who goes to a Starbucks store and shouts “Black Lives Matter.” AP’S ASSESSMENT: False. This is not a...

Not sure who your client is but he or she might have to get better sources before posting such ad. If in fact it’s false then she basically not only spreading fake news but also disrupting starbucks normal business. So the ad seems indeed very questionable

yeah, that’s probably the reason for that fact-checking, Starbucks has denied that news.

Guys first of all it was not fake news, it was an advertisiment, do not confuse news with ads. Second…this topic got the attention of many channels in my country, and the big question was…who is USA today to say if news are fake or not…

A social experiment that shows again how they manipulate us, and the power of Social Media!.
This graphic was exposed to millions on matter of minutes, so the BLM message.

The German channel DW did a review of a list of fake news published by USA Today and other American news networks…quiet shocking.

And now for those that still think that all images are not checked by IG…well they are, the graphic was modified and even recreated just using the same text and again was detected.

So to conclude what’s in the story about getting a free drink was this actually true or was it not true? I’m confused here

Not trying to argument against. Just trying to understand cause there are some questions that arent really answered.

Edited: As far as i can check google about the free drink for shouting BLM it seems like it was never true. It seemed to be a hoax. Not sure why it’s not justified then for news media or just anyone to tag it as untrue?

About censorship, how does censorship related to news media or anyone also reporting it as this AD being not true? As far as my opinion goes, considering the free drink for shouting it was true, I feel like using free items, free drinks or just anything in return for something commercially related to a racial issue feels off. Shouldnt Starbucks either support it and or donate without something in return to show genuine support. Hope i’m phrasing it in a good way.

Fair question, there are two views:

the 1st says that Starbucks did create the ad knowing that will cause lot of noise, as they had some issues related in the past. So far nobody from Starbucks talked about this, even USA Today was not able to talk with them, this is a red flag, why you wouldn’t talk inmediately if it was not true. Even bad advertisment is advertisment.

The second view says that was fake from the first post and then exploded once some stores did give free frappuccinos, maybe employees were confused or not.

At the end of the day we know that Starbucks got ton of FREE ads, everywhere! and also we got the sad news that IG/FB is using those shitty media to control what we see in our social media.

I agree that bad advertisement is advertisement but hell no i would never even try with racial or sexual issues like today. The cancel culture of today is very strong honestly. If the issue is strong enough and the advertisement abuse is questionable enough i’m sure it will hurt you a fair bit.

Just out of curiousity, your client is unrelated to Starbucks right? Just someone who felt like he/she was doing good hyping a possible hoax?

Thing reminds me of something i read online where people donate thinking it would go to the issue but rather it goes (mostly) to change.org for ranking your campaign higher among the top donated or so. So people got kinda scammed or so paying for change.org instead of the thing they thought they would be donating for. Didnt check the whole story but damn these brands and organisations using sad (racial, sexual assault, bodypositivity, … ) issues to selfpromote

Of course she has nothing to do with them, I just shared this one with you because it was the first of a endless list of clients contacting us for this. Around 150 reposted the image, all US based, from our client list.

As a brand and org’s involving themselves in hot topics like these in terms of support it’s always risky. You never know wether you’ll receive backlash of any kind as much as you personally support the issue.

For example nike supporting BLM yet supporting sweatshops making their clothing. The list goes on.

But yeah it’s off topic. Thanks for sharing @IGsocialize