Follow User Per Operation Not Obeyed By Jarvee? Leads To Blocks

So this issue I have noticed basically for a long time on Jarvee. The issue is Jarvee wont “obey” or follow the rules you set in the follow between x & x users per operation. Even with the new setting “scrape all users before following” checked. It will just follow a random amount of users (short of what you set) stop, start the following/scraping process again and follow more and keep doing that until it reaches your users per operation. This is not good because it basically ignores the settings you have set and can lead to blocks.

Heres a screenshot of how it looks on Jarvee. As you can see this lead to a block at the end because it keeps finishing and starting the follow process again to get to the operation limits that were set. Instead of following all the users required in one go. It only follows 1 user at a time before getting a bigger chunk at the end before the block. 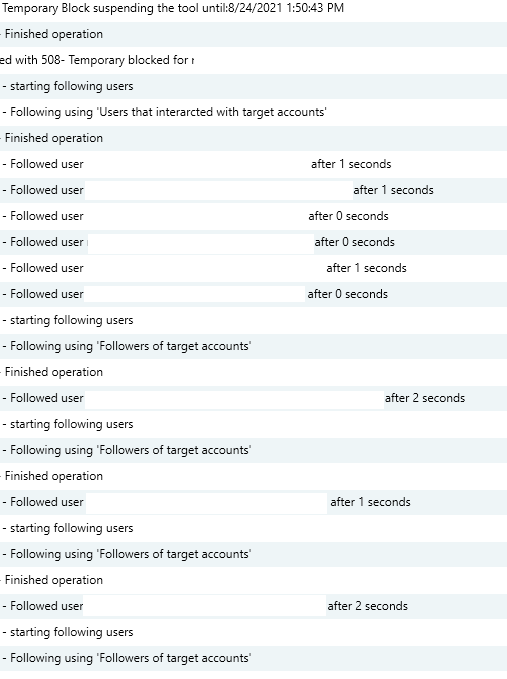 The settings for the screenshot above were:
Follow between 10-20 users per operation
Contextual actions 10-20 users with delay of 0-8 seconds between each action
Do actions only from context 100%
Scrape all users before following checked

A few things I noticed about this issue:

Has anyone else noticed this issue happening? Its bad because it leads to more blocks since it basically makes your settings & delays useless and will do its own settings & delays depending on how it runs & when.

If you’ve noticed something that is out of the ordinary, I think it’s better to contact their support and elaborate the issue. I am sure you’ll get the most optimal answer that way because to check that, we would need all the settings, sources, results etc.

@Jaha I posted the settings and results above. I contacted Jarvee too, just waiting on a reply.

Anyone else having this issue? I cant be the only one…

I did a test where I set it to follow 100 users per operation and it never hit this it follows 30-60 users than finishes and starts scraping again. This is just an amplified example on a larger scale of it not working.

For the Follow tool, there’s this logic that if the number of users to be followed per operation has not been reached, it will skip the wait time and it will follow the rest of the users (to reach the X - Y users followed). But yeah, it looks kinda off that it only really follows 1 user then reports as finished operation.

I also noticed this when jarvee posts outside its operating hours. Like hours after. Their explanation was that jarvee needs to be random and it will do random things. They told me Night mode is one way to avoid that happening.

If “scrape all users before follow” is checked though wouldnt it not need to keep stopping scraping and following again because it should already scrape the total number of users to be followed per operation making it so this issue doesnt happen?

I don’t think this is related to ‘scrape all users before following’ because there’s no scrape operation in between. The tool just follows a lesser number of users than it’s configured to but no scraping on the Dashboard Summary events you sent.