Growth anymore not possible with automation

is that in one day? Doesn’t the number of ‘followins’ cap out at far less than that?

Automation still works but yes, it’s harder day by day. You have to use 4G proxies and randomize your actions as much as you can. I’m using my 4G Proxies really fine but I know how to randomize my actions so I’m trying to leave as few footprints as possible

So you just show an analytics of some account and say Automation is possible,LOL.

Block can be avoided, as said on the post, there are different method and strategies.

Botting is not anymore the primary way.

Human behaviour is the key.

Growth with automation is 100% possible, but you have to be smart and always try to think ahead. For example, I remember a couple of weeks ago someone thought it was a waste of money to have a custom bot build scrapers and now it’s almost necessary. Here are stats from my slaves that I just turned back on today (I turned them off because of the US Election): 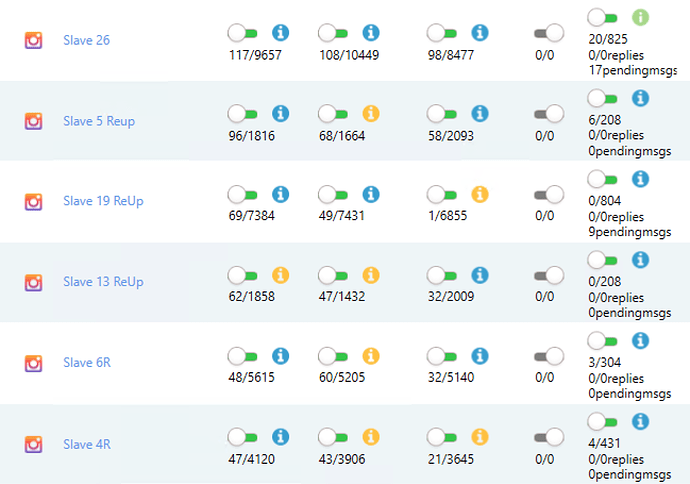 Keep in mind the some of these accounts didn’t hit their limits because I had to add some more scrapers and sources.

Also, if there’s one thing that the harsh IG limits taught me it’s that you have to always look at other options. Once IG started implementing harsh API limits, I started to look at automation on other platforms like YouTube and LinkedIn.

These slave accounts have been running for several months and I only rested them for 1 week because I feared the US Elections would negatively impact automation.

For sure! I’m pretty confident they will since they have pre-election.

automation is still working great, yes it’s harder than before but it’s still there, and as the guys said above you really need to be smart about that, scrapers, API limits, safe actions, testing, and testing until you find the sweet spot for your account’s growth.

If you run automation with jarvee you will hit soon or later.

I don’t want to sound rude but I am not in this game 1 month.

These companies don’t want anyone to grow their business for free on their platform.

You should be manually growing and then eventually pay them for advertising so you can really scale.

Im back to growing my accounts manually. What sucks is recently my gmail got disabled but i recovered it. I noticed they don’t even want u to cold email (which i think is most effective method to reach the most users quick) so its a crazy game for sure…

If your Gmail got disabled,probably because not that they don’t allow to cold email but you must have made some mistake in warming up,email verification,limits or something.

yeah I think I pushed it. I went from 50 emails an hour to 100. I been doing it for a few weeks now. Im going to play it safe and start emailing from someones home/ip that i know just incase i hit a black list even tho my emails are targeted and non spammy.

I think everyone has its own tactics and opinions. For example, a friend of mine is automating accounts without scrapers and he’s doing great soo, doesn’t necessarily have to be that if the method works for one it will have to work for all others.