I forgot to pay the MP licence but then I decided so the fallow tools stopped for the IG accounts.
I seen that the engagement of the account is very low now.
From 400-500 likes / photo, I recive only 150-200 now and very low fallows.
The account is not ghosted ( I think ) because checked the posts after 40-50 minutes with incognito and no account and the posts were still there.

Is this normal or should I start to worry?

Your following / liking was probably getting you return engagement, which would explain a drop if you weren’t doing it. Just a theory.

I think that also, but I’m afraid of a shadow ban.
But I think if I see the post even now, after 2+ hours there is no problem

I don’t think it would be a shadow ban if it’s getting some engagement, it’s just lower… but someone with more experience can probably chime in. 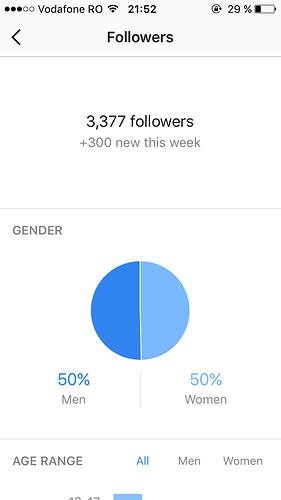 And social blade is showing +90

Social blade runs a bit behind, give it 24 hours.

If you want to get rid of the engagement hex you currently have, you have to post a funny pic and tag the MP team in it.

WARNING: Your results may vary

It’s a few hours behind. trust me