I’m watching IG from few weeks and it’s behaving weird…
I guess they are making changes to their algorithm.

Why am I saying this?
I observed this on some accounts of mine:
I was following 700-800 and liking 800-1000
But i wasn’t getting much followers and the engagement dipped too!

Also shutting down instagress because of some British bloggers has concerned me over IG taking on automation services and bots!

Also shutting down instagress because of some British bloggers

Can you explain more?

I was on fb yesterday and someone posted about Instagress in a group.
I commented: Alternative: MP!

Some one just messaged me and said:
If you want avoid MP getting banned the same way, don’t comment about it! Bloggers are lurking into IG groups and finding more services like Instagress.

She also said that:

I checked Twitter to confirm and you can too!
Some bloggers are celebrating over Instagress shutting down. 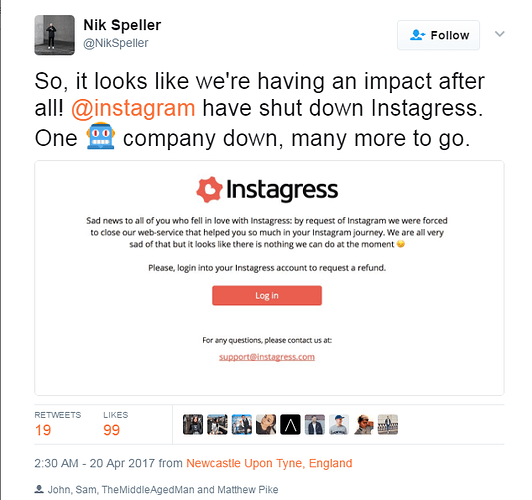 Coders don’t give up. You can ban all the bots that are out right now and a new one will appear tomorrow.

Its a great market to be in.

But Won’t it cost you badly if a service you use for your clients/your acounts shuts down out of nowhere!

yes it would but if your working smart you can figure out how to work around it.

I don’t know instagress how did they shut them down?

That is interesting. But look, there are countless bots out there, what makes 1 blogger or 10 bloggers telling IG about it makes IG decide to make a move?

There has to be a media pressure somewhere, but there isnt any official statement.

Look at all the BS rumors fly! Instagress said it themselves, they were shutdown over trademark issues.

, they are by and large the biggest users of automation. It’s just people jumping on the bandwagon. Instagress sucked and the people who used it were terrible.

There is a probable reason for that behavior and it likely has ZERo to do with the IG “algorithm” since you didn’t show us your settings, perhaps you were being too aggressive with the settings. MP has a built in delay timer so that if it is getting error codes from too many follows likes etc, it stops for X so that you don’t get banned. You can change this setting, however I highly recommend against it.

At least noone is talking about ghosting and shadow banning anymore.

And here is what noone is really talking about…

There were god knows how many Instagress users, and no one is reporting a ban. So yes, the service shutdown, but noone was banned.

This will all settle down and in a few weeks it will be something else that will cause users to find and swamp MP social.

Agreed!
Thank you for your insights

Why does everyone think that MP is some kind of secret tool?
Just google Instagram automation, it’s right on the first page. And if you can find a tool, I’m pretty sure that Instagram can, too.

3-4 years ago, Facebook changed their algorithm in such that only 1 percent of the fans could see it. That was not all…the ones that seen it, unless they liked or enabled notifications to see…would not after awhile. Many left, all pages effected. Instagram is probably going the same way now if not in the near future. People get scared and get pissed. After the storm…pages still grew, people still saw…just in dramatically lesser amounts. I believe, only a few pages will now have organic growth in the near future.
It is the new face of Instagram. Some shadow bans are not real shadow bans but infarct the algorithm kicking in to swing. When all this crap gets settled down…it will be back to business for us…just ride the storm and see what happens in the future.

I observed this on some accounts of mine:I was following 700-800 and liking 800-1000 But i wasn’t getting much followers and the engagement dipped too!

This is exactly what i have been telling people.

With lower follow settings, I am able to gain more daily followers guaranteed!

Mine follows around 50 every hour with an 8 hour break, so that’s around 800. The thing is, I gradually increased it over a period of 4 months. All’s well so far.