So i started using the scrape tool and these were the options i used.

So i go into one of the accounts and into the scrape settings, i put the option to scrape using 30 accounts ( I had about 25 valid ones), and then i started scraping using about 10 hashtags.

After a while, the account from which i started the scrape got delayed because of api calls i assume, and the scraping stopped for some reason. My question is why did it stop when i had it set to scrape using 25 accounts, and why did it not continue when i went on to continue scraping ( the account that was delayed was valid again at that time, but it shouldn’t have mattered since i set it to scrape using multiple accounts). Thanks! 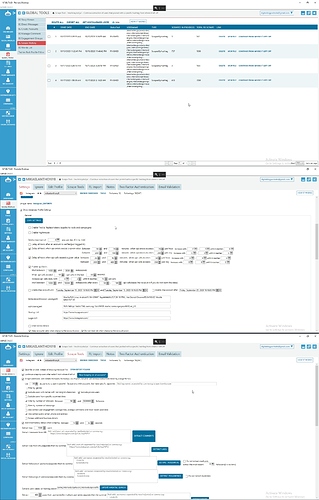 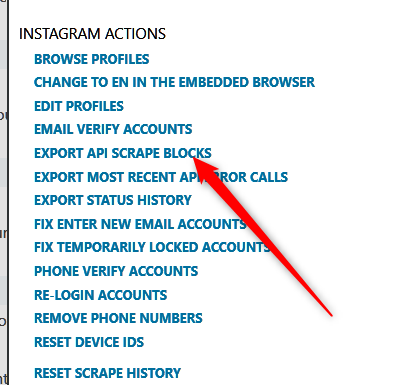 This is what i get when i select all of the valid accounts and go to export API blocks.

Am i doing something wrong here?

From that it looks like only one account was blocked on 10/15 @ 8:06pm and is no longer blocked as of that export.

it looks like one account there with API block, try to add a tag to all your scraper accounts then add that tag to the following option an try again

I did that but whenever the account i started the scrape with gets delayed, the scraping stops… I dont know why since it should scrape with all the accounts. I sent an Email, and was told to uncheck the delay option on the accounts and only have enable api limits, but wouldnt that cause my accounts to get blocked easier?

I tries disabling the delay options and put max users to extract to 2000, and still the starting account didn’t get blocked but the scrape stopped at around 1500… Is there something im doing wrong?

And i wantes to ask does the scrape always start from the beginning (meaning does it scrape the same users when i start it again, or does it save it so it scrapes new ones) if it doesn’t scrape the old ones then i can just start the scrape again when it stops and it won’t be a problem

Does the continue where it left off option even work on jarvee now?

Hey buddy, I’m having a similar problem. Was about to make a thread about it when I saw yours.

Scraped one hashtag, successfully got me 14k emails in just a few hours (awesome)

50 scrapers are simultaneously scraping and I am having to click “Continue from where it left off” otherwise it just stops for no reason.

I have 1,000 scrapers so there is enough firepower

I’m having this issue as well, any solutions? It’s cumbersome to always restart where it left off after 200 or something.

Take a look at the mainlog.log file, it should tell you why.

I’m having this issue as well, any solutions? It’s cumbersome to always restart where it left off after 200 or something.

Following what Henry said, yes, please check your mainlog.log files. It could be that the scrapers or the account where you started the scrape gets delayed.