When I set up a scraper on Jarvee the account gets blocked within a day without even doing any actions. How is this possible? No actions are being made on the scraper accounts, they are only logged in with jarvee and that’s it…

Does anyone know why this happens and how to prevent it?

If you bought the scraper, ask for a replacement. I’ve had a batch of scrapers where multiple die on first first activation in JV, and the vendor replaced them.

Always make sure to at least have 1-2 accounts per batch (that you purchased from a seller) only valid without doing any actions. Some sellers are selling really low-quality accounts that will get banned or blocked without doing a single action.

Instagram does not ban always right away, normally they try to collect as much data as possible on a batch of accounts and then ban them all at once. It is the smarter choice because by collecting the behavior and fingerprint they can ban more. Anti-Cheat systems in today’s games also do it like that.

Check the API stats and see if it does API Calls. It’s possible that the account was used in the background by your main accounts that have Use only EB checked, or you run the scrape tools on the other account, and the tool needs to use the account to scrape because the other account gets API Scrape blocks. If you don’t want the scraper account to do any API Calls at all, you should switch off the start/stop button next to the account in social profiles tab.

essentially it’s named a scraper account for a reason which is scraping users and doing API calls and those are considered as actions even if the account is not growing but still, these are actions made by the account and you will get blocked if you do a lot 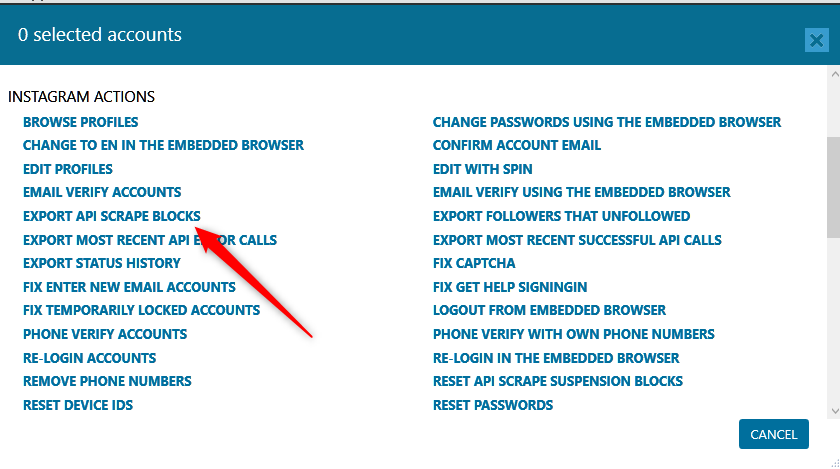 I remember when I started working with automation. I encountered the same problems with Jarvee blocks and more blocks instantly. Let me save you money and time, buy accounts from sellers on this forum. The days of buying cheap IG accounts and low quality proxies slapped them into Jarvee and begin to do actions are over. Nowadays everything counts from account creation to the quality of proxies use. You will find good proxy sellers here as well. Also, be patient and test,test, and test some more before scaling.

As soon as you validate account in Jarvee, if there are other accounts that are already doing actions, your newly added account is going to start doing some scraping API calls as well.