Bitcoin is here for ages, and I still don’t understand how it works. Lately, there seems to be a crackdown on some services by paypal, and more people are buying into bitcoins.

It’s just an assumption, but the date correlates very closely. Since December 20 it’s been on the rise and it’s now $900+ 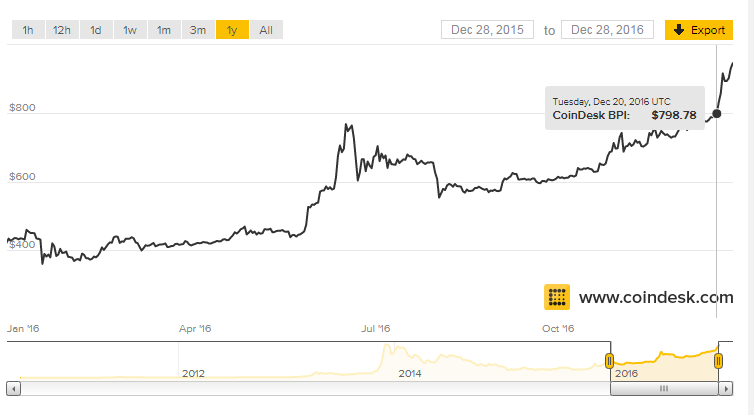 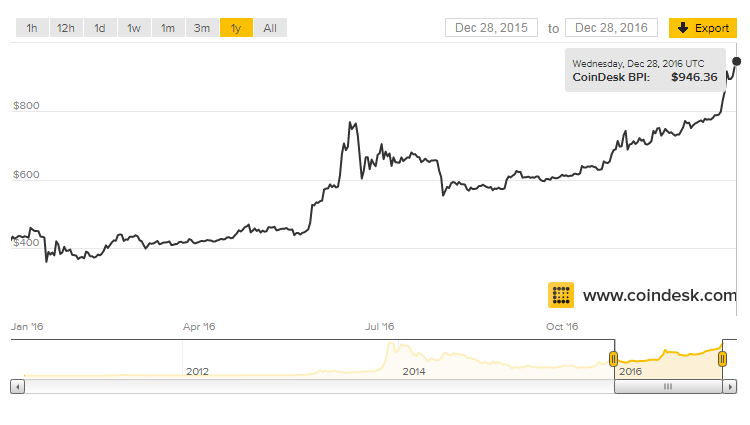 I tried mining some time ago,but its useless,its imposible to make any bitcoins by mining for a simple user.At the moment the only viable option is to invenst,buy low sell high.
According to the chart the buying position was at 800$ ,it looks like a breakout pattern,the first atempt was in july 2013.At this point is pretty much useless to buy,since its at new highs,a drop is bound to happen.This is all from a trading perspective.

I got into bitcoin back when it was about $200 a bitcoin - bought up then it hit it’s peak and began falling I sold at $900 (used at namecheap and other providers to build a pbn with the profits) unfortunately I loss courage when it bottomed out but now wishing I bought in again.

Looking real strong at the moment. Market cap is highest ever.

I bought like $400 worth of bitcoin not too long ago, now it’s currently at $508. Nice little gain. I recommend buying it, considering the situation in India.

I don’t recommend buying/selling Bitcoin unless you have a solid experience about trading, otherwise you might lose your money ( I lost about 1200$ in etoro

Well I think bitcoin is just a dream, you just think what if you could buy low and sell high but that’s easy to say after it happened on the other hand extremely hard to do achieve before it actually happens. Like with normal stock markets, most people are bound to loose and besides you need to have a lot of cash to be able to make a lot more…

As for mining it, that’s been over for a couple of years for normal people, there are whole companies doing this now at a whole new lever with thousands and thousands of dedicated harware pieces that are in places where electricity is really cheap. There’s no way to compete with that.

My mindset when investing into bitcoin is long term. It doesn’t matter if it goes up or down, I’m in it for the long run. Same thing with the S&P500, it preforms better than any investment advisor over a long period of time, although it does have it’s ups and downs it turns out to be positive return long term. Nothing is truly predictable and you need to risk to gain. My personal opinion is that it’s a good investment long term, but that’s just what I think

My reason is totally not from investing standpoint. Since i mentioned there’s some strange issue with paypal on some places i used to buy accs from, I started looking into bitcoin.

Found a few places that lets me trade BTC with paypal, and they ended up costing alot. So i made up some strange theory why it suddenly jumped, because there might be alot more other type of service people want to buy but paypal or the likes is shutting them down and people have no choice but to buy bitcoins.

My theory is probably way off.

As for mining, i’m sure you guys have seen this

I did some calculation as i was really interested in it, even wanting to buy off some of the specialty mining rigs. Until i realized, every day the dificulty rises, and the moment you bought the rigs that gives mega hashes, the next day someone sells giga hashes. So I would have to sell these off like in a month or 2 for a double hash rate every time.

hi
am newbie i want investing in etoro
Is this risk ?
i need your advise
thanks

most people are bound to loose

That’s exactly what happend to me

As for mining, i’m sure you guys have seen this

wow, these guys really took it to another level

I am a newbie when it comes to cryptocurrencies

How should I go about investing in BTC? My friend mentioned using a paper wallet for security?

What is the process people would recommend?

It’s just an assumption, but the date correlates very closely. Since December 20 it’s been on the rise and it’s now $900+

@dddd If you see your old thread, do you regret that you did not purchase bitcoins?

hello, why do you think the situation in India will impact the price