Hi! I have a question for those who works manually. Accounts in my niche are followed by groups of same people, so how do you avoid following same person twice or once but with several slaves? I’m from poor country and can’t afford automation services, so doing all manual, maybe you have some tips.

Have different target accounts for each slave like 3-5 targets per slave.This way you will target new users everytime.

This way you will target new users everytime.

This will still cross follow many users, especially within same niche

yes that can be but the numbers would be less like this.

For more accuracy,I would target different hashtags,accounts and geolocation which would be different for all of the accounts.

yes that can be but the numbers would be less like this.

it’s hard to keep track of all users that you have followed manually so that you don’t follow them again especially when you have multiple accounts at one point it will become extremely exhausting and filled with the same users followed on multiple accounts.

I would really recommend automation to solve this issue, especially that Jarvee as an option just for that. 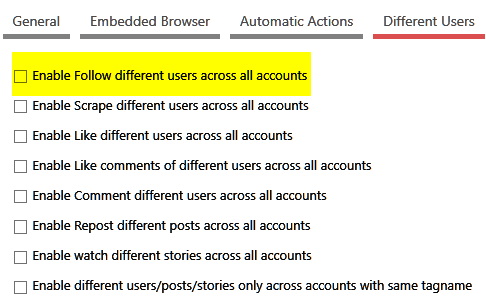