[NEW FEATURE] Instagram Hiding Likes is HERE! WIll you use it?

Instagram announced a few weeks back that Hiding likes will be rolling out in the US.
However, they never clarified which specific feature would be rolling out.
So imagine my surprise when I went to delete a community flagged post & saw this on one of my accounts: 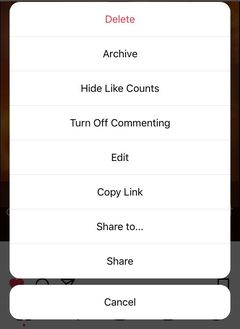 Do you all have this feature yet?
Will you use it?
Or do you think it’s useless if its an optional feature?

I actually do not know the use case for this.
If you have an Account with a low ER you will be able to hide it better.
But I remember that there was a Dip in likes when they first introduced not showing likes.
So i think it would rather hurt your account then help it.
It removes your Social Proof from that post imo.

I don’t have that yet in my country but as the guy above said I have no idea how that could be helpful, I thought that when IG will officially announce that option they will automatically hide posts likes but introducing it as a choice… that’s new

I don’t have that feature yet. I can’t think of anyone that may benefit from not showing their like counts. I’ve seen people turn off their comments, and I know that could be a good move to some people, but hiding likes count just makes no sense to me… at least for now.

That’s an odd way of rolling it out. Maybe they’re trying to see who actually does it when given a choice and, then that will give them an idea of how many people want it?

Use cases? I can only imagine influencers trying to hide their numbers and ordinary users who don’t want people to know how few likes they get.

Brother next thing could be hiding followers and followings. What better way to fight automation and scraping eh?

Remember when Facebook started hiding friendlist?
Imagen not being able to scrape likes list, followers list, targeting potential active users would be close to nothing.
Any approach that would stop automation and force users to buy adds would be the way for facebook to go.

Well then we would only scrape Comments and like comments I guess. Just like on Tiktok haha

But you definitly have a point here.

Exactly! Nice catch. And will that be worth it? Likes list vs. Comment list. That will be a huge difference in source count.
Closing down the margin is all what it’s about.
I can also imagen that it will help any business, blogger and celeb to avoid having their followers “targeted” by profiles in similar niches.

But they wouldnt need to Hide them at all if that was the plan. Tiktok does show Likes / Followers but they can not be scraped.

I do not believe that they are focused on the scraping right now but rather the Reach of People in general.
I heard that they want to turn off the function to share your Post in your Story because it could give the Person / Business more exposure for free that they can not sell anymore.

Lets see what they will do next

Now I gotta admit that I do not know anything about Tik Tok. I don’t even know what the app is like and how it works. Never had it. But I can imagen that the vast tools available for IG does indeed allow scraping. The fundament of the IG app is built around revealing such informations to begin with. People are used to have these informations within reach and available.
Now with all these restrictions that has been published by facebook on IG since 2019, and the countless bugs and outages users have experienced since, has had a big impact on the users’ experience overall.
Now implementing a hide feature is much easier, and “allowing” the users to use it is much more diplomatic than forcing it down everyone’s throats. I can imagen a lot of users might actually use the feature. Why not prevent your competitors from reaching your followers when you can? The same goes for closing down for resharing stories etc. Surprisingly many users I see using this feature. Maybe because they want their content to be seen on their own profile and not kept reshared on thousands of other profiles. Reposting profiles tend to remove watermarks, hiding the actual sources of the content to take credit.
All in all when you have such a huge platform it’s all about restricting in bits, whem you want to implement changes so that users aren’t overwhelmed. And making it an option makes it even better.

I heard that they want to turn off the function to share your Post in your Story because it could give the Person / Business more exposure for free that they can not sell anymore.

Even this statement of yours again gives a clear impression of where we might be heading.
When IG was released it was an “open” platform made for sharing photos and networking with likeminded people. Today the path is to make money FIRST on a networking platform.

Seriously when everything comes to an end, I don’t mind. We have a free platform to use, and I won’t complain. This is why you shouldn’t put all your eggs in one basket.

By the way, a side step that might benefit all EU users
I can reveal that the European Union are planning to raise a finger towards Facebook. Alot of buisness have bern hardly hit. It’s almost impossible to get hold of Facebook/IG support, when profiles are facing issues, and that highly impacts legit business owners. The EU believes that Favebook has a big responsibility to solve thsi issue.

Ohh really, I didn’t know that @Hank9991. It’s not released in my region yet. Thanks for heads up.
Nice to see you again by the way