I’ve had 3 accounts get 3-days temporary bans in the past few days, and it’s the 1st time it’s happened to me in a year – any experience with this?

I’m keeping the accounts at ~150 F/U per day spread over a 17h period using 4G proxies. 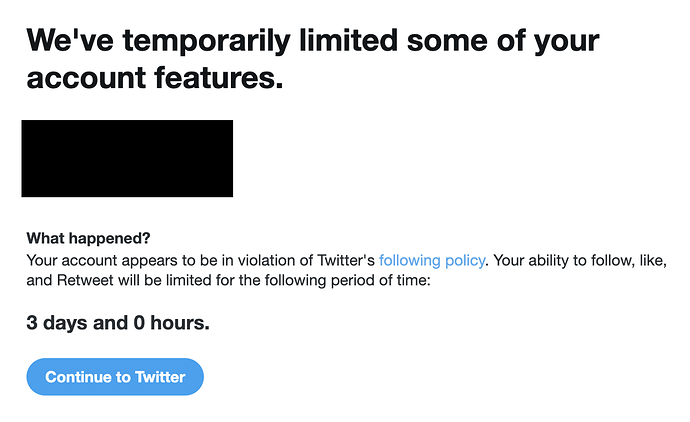 my accounts are working fine for now, have you done any suspicious activities other than F/U?

Nope nothing more than what I’ve been doing for the past months. Plus, the accounts are on different proxy providers, so no problems there.

Weird thing, is that I still can tweet and like a few stuff even after having gotten this message – really strange.

I had some accounts get banned, while they did nothing wrong or automated like likes/RTs.

I figured it was because I bought shit accounts, but rest of the set is up and kicking for now.

Looked around, & didn’t have to go far to see a ban wave was underway (go to the comment section of any twitter support tweet to find out).

I’m running accounts for clients with relatively high profiles, so their trust score must be preventing them to get totally banned.

I guess it’s better to keep it lower for now. Strange thing, only the accounts running on 4G Proxies got the temporary bans, none of the ones running on DC Proxies.

that’s strange indeed. are your clients doing actions manually on their phone? perhaps that’s what triggers the temporary restrictions.

yes, keeping things low is a good idea, you never know what might come next.

They probably are performing actions on their phone as well. But it wasn’t a problem before though.

I had a few accounts get suspended. Is there any way of getting them unsuspended? I’ve tried going through their appeals process.

I don’t think there is any workaround on the suspension other than contacting them directly. have you tried that? what did they say?

The only ways to get them back is to contact them, but you will have to be patient really and send many request through their form.

Are u using mobile proxies?

Also found quite a few of my accounts got banned recently. Although, I believe its because of me not handling the re-PVA’s and captcha solving.