Hello everyone,
Last two days I sold a 20k account for $110.(its hot girls niche thus the price).

I first posted it at one the instagram market place and someone pm me.
He then ask me to go on skype so he could trust me better so we had a call and discussed it.
He told me he will think about it and contact me in the morning.

So the next morning, we had another skype call and he told me that he will pay in half and two separate payments,
first payment will be sent first and I will then change the Instagram account to his email to prove I have the account and then changing it back to the OG email. After that then he will send me the other half. I find it weird but well he got a good feedback on telegram so I’m okay with it.

Another weird part is that he kept putting the calls down before even transferring and told me he had connection problem so I guess it’s true. I did just what he asked and he transferred me the amount in two separate payments. I did a typo mistake on the password though at first since I accidently press ‘0’ instead of 1 but I did gave him the password after. but still he kept spamming on skype and saying I’m a liar and scam etc. I then took a video on phone showing I could login on the gmail account with the email and password I gave him on skype(video showed i copied paste exactly on the gmail login). He then said he dont want the gmail account he want the instagram account.

I then found this very weird because I told him, it’s OG email(which even have the email of first signup on September 2016) and i already passed him the Instagram account credits. 10 minutes later he took a screenshot saying the Instagram account is not linked to the gmail account and that I’m a scammer. Sooner later, he filed a dispute on me.
I tried login in the account and I could not login both so I guess that he fucked me up.(lol).

On both of the dispute(two payments), he just said ’ seller never give me his instagram account’.
I then type everything in proper sentences and etc and explained through paypal since on skype all he kept saying is scam. He did tried calling me on skype but i rejected it since i want it all to be on words in skype so i could at least prove it somehow.
After that, he then said on paypal dispute page that he would only cancel chargeback if i gave the accounts which i already did. I kind of had enough actually since i know he wont cancel so I submit it to paypal.

I uploaded all the screenshots of the conversation and explained the process. I even send paypal the video i took and caught his lie when he said he couldn’t login.

I know now that paypal has buyer protection for digital goods, so how do you think of my winning chance in this case?
I somehow feel i kind of lost both the account and money but I hope to get any ideas if i could win this case.

If he put address when he purchased , paypal will ask you for tracking information Even if you sold a digital good.This will make your winning more difficult.Second +1 you kept the converstation.What we think does not matter , what matters is : request no address when selling digital stuff for more security.

I you lose the case :
-Go to your gmail and say “it’s stolen” then get it back

I don’t have the answer but I am going to predict you will lose the case simply because its a digital good. I wish the best of luck to you. It sucks that there are shady people buying accounts. If I was running a niche like this anything over $100 I would only allow western union / money gram payment.

What type of dispute was it?

Goods Not Delivered? or Un-authorized dispute?

I’ve been selling online for a decade now and believe me, Paypal ALWAYS sides with the buyer.

They only side with the seller if there is OVERWHELMING evidence that the buyer is a scammer. And I literally mean overwhelming in a sense that it’s already staring them in the face. Which rarely happens.

There’s a high chance you will lose this but I’ll hope for your good luck.

Did you sell the account as family and friends payment or goods and services payment?

I’ve sold 1 account before and I asked for the payment first and specified that it should be sent as ‘Friends and Family’.

Always ask to be sent like Friends and Family . Also ask to pay you full price of the product. I wish you good luck with this. You should protect yourself first

One word for next time. Bitcoin

One word for next time. Bitcoin

Not everyone have bitcoins and most people would rather pay with F&F than bitcoins.
Maybe thats why OP sold with paypal

True but, if they have a CC I’m sure it wouldn’t be too difficult

Since a lot of scammers usually use WU, Crypto Currency or MoneyGram, why not just use them when selling services so they can’t get their bucks back and scam you?

Your SOL, never sell with the OG email. change the email and keep the email on your OG that notified you of the changed email. If he fucks you, just find that email and click the link that you didn’t authorize the change. It will revert it back and you can recover it.

I was thinking is there not a way to fake the OG email, when you recieve the OG creation email from IG copy it make a new email @ with all the weird numbers what usually the IG support reps have then send the same email to your new email address, the one your going to give the buyer. I guess that will work well for scammers but I’m not sure about legit sellers. Opinions?

Even than it’s possible to refund/cancel the money if if’s send as Friends and Family’.

I’m not scamming, as I’m not saying I’m selling with OG email. Also I’m not trying to steal the accounts back, I’m just not trying to get a dick shoved in my ass. Seller has 100% of the risk here. I’m not going to feel bad for doing the single thing that helps me not get screwed.

90% of people who buy accounts don’t even ask if the email is OG anyways.

Hello everyone,
just an update I won this case

I got two emails for the two transaction.( i can only upload one image though since I’m a new user)
First email was that I lost the case

And the second email was this 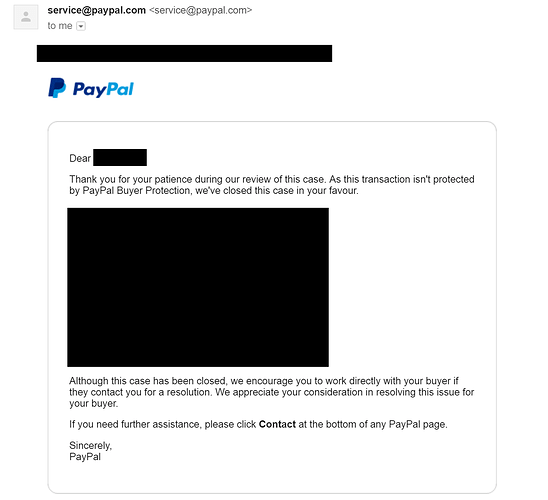 I found it weird why is it I won one transaction and lost the other but when I checked my paypal, both the transactions are there! I’m so happy right now

Thank you everyone for the reply.
I will stick to other payment methods when I’m selling more accounts just to be safe

Congrats on winning the case!