Just saw that people were reposting this 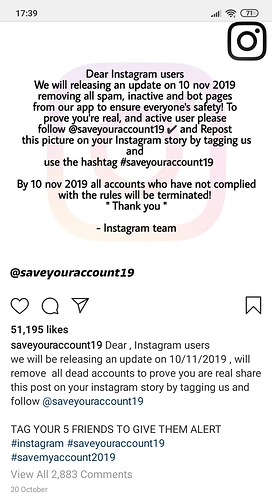 he already has 258k followers, next thing you know he’ll become an influencer lmao

People believe anything so you need to bank on people’s stupidity. Props to this method if it works

What could his point be?

It’s really smart, you just send some fake likes, fake followers and fake comments when you start, use bot to tag 500-1000 real people or more under the post, and just watch your account growing on it’s own from there. Then you just put some random picture or delete all pictures and you sell the account haha. You will always have people that just started using the instagram or just stupid people that are using it for years and still falling for it lol

haha but its not very ethic at all and scaming people is the last bet well i concider it for the deseperate brains but and they’re not smart at all cus be smart never involves lying its that simple a liar is a liar and not smart maybe you can be a smart liar but you still a liar and also dumb why ? because simply the methode its so stupid

ps when i say you i dont mean you personaly

The method may be stupid in your eyes, and “ethic” is a word each one of us understands differently, yet this person will sell this account in thousands of dollars. He may be a liar and dumb, but at the end of the day he doesn’t mind any of these while having all that money.

My man no ethics in this business, or any business. You are here for making money not some ethic and moral shit. Being smmart never involves lying? Are you for real, you think all these millionaires and billionaires are stupid and they never lied? They are the biggest liars and that will bring you biggest money. Method is brilliant, you just need to decide if you are a wolf or a sheep. And from what I see you are far away from being a wolf. People always complain about this about that, nothing is fair, people are scammers bla bla. And in reality they all want to be in their shoes. But they are just too lazy or too stupid to be there.

Hey hey hey,
In many cases you may be right but I for example run business based on quality and ethics. (so what I’m doing here, right?)
My inspiration always was to provide the best possible service to my customer just like a true luxury brand and guess what? It paid off, customers come back and recommend my stuff to their friends, people are shocked that there are still companies like that. Never sacrificing quality, treating people like I would like to be treated and it works really well. People will like to work for you and with you, because you are creating a success story, not one time shot.
Building trust is far more profitable in my opinion.
Be a Bugatti in your niche and you will go far.