Before the changes with the API blocks and the fall of so many analytic services, I used to use Iconosquare to tack down which of the hashtags I used, performed well. I unsubscribed after they weren’t showing anymore every information that I needed.

Recently I’m growing more and more busy and I’m not able to check daily my results with the hashtags I use, although I can see some do well in particular days and others not so much. I used to be able to check which is doing good and which aren’t so I can understand better.

I noticed that when I do Shoutout 4 Shoutout with someone and I post their content that contain their own hashtags, my engagement skyrockets on their posts, than with my average hashtags and posts. So I am considering to make a research about that (@MojoJojo I’m looking at you on this matter this coming 2019, hopefully you’re still up to help out).

So my question is: Is there a good website where I can track how well I’m performing on particular hashtags?

Side Information: I tried different number of hashtags, with 28 I perform best as I’ve noticed.

Thanks for the assistance and would gladly listen to any advice that can improve the things I do.

Nowadays it’s pretty hard to track your hashtag performance because every person has personalized hashtag top 9’s meaning it’s almost different for all of us.

I have tag tracking in IGMonitoring

@Vasharal I wonder what exactly you mean by writing “I can track how well I’m performing on particular hashtags”?
How the effectiveness of a particular tag was measured, maybe I will add it to the system.

I think they did this by looking at which posts that did well had which hashtags in it, a little like this(no clue about what informations you could get out of the API back then): 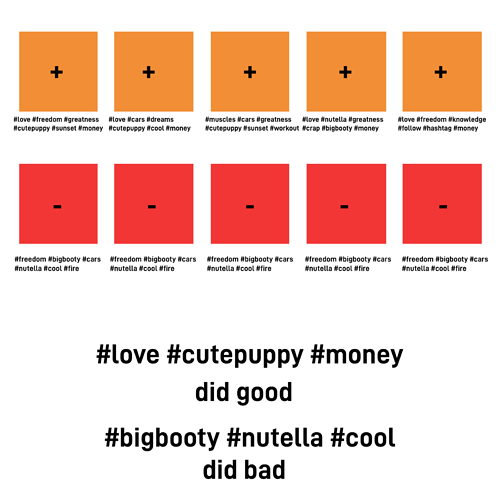 This is why I was wondering if there’s something I’m missing out.

Unless you have a business account, there is no real, accurate way of getting hashtag data for your own posts.

There are places that give you estimations, but at the end of the day they are speculative and with a big range of “you are getting anywhere between 1 and 1000 likes / impressions on X hashtag”.

The best tactic that I have found in the current landscape is to have a solid of mix the biggest (still relevant) hashtags, medium ones and throw in some super tiny ones. Given that everyone gets a personalized feed these days, you need to cast as wide net as possible and vary them as much as possible.

This is an oversimplified way of what I do, but it gives you an overall idea. It works pretty well.

Note: when I say it works “well” I mean it works well if you are using hashtags to grow your account, post good content, have a posting schedule, don’t inftlate your numbers with outside boosters and have an account below 100K.

Looking at you @Alexnvo lol

No, what I mean to track which hashtags you’ve scaled best and had the best results, because after checking after a few days I can’t see if my post was on the Top posts. So maybe there’s something that can tell me.

I can’t see if my post was on the Top posts.

Every person gets their own top post section so that data can only come from IG. At least for now, they are not sharing it.

Yes, I am pretty much following the same method of using Hashtags with popular and not so popular ones, I check my statistics with the business account, but as any other, they don’t give an individual result as per which Hashtag you used once did well.

Yes exactly what I mean, Iconosquare was sharing similar information.

Hashtag ranking is almost entirely out of your control once you have set a solid foundation. If you are posting with any type of tool that can randomize your hashtags, I would set it up and don’t touch it for at least month.

Your time and energy can be spent on something more productive

I do randomize my hashtags daily, some days I do quite well, sometimes I do poorly. I’m also changing my posting hours to see when I do best. Now that I moved to UK, my posting hours were shifted later in the evening, but as mentioned above I was doing more poorly than the Shoutouts.

I considered that the Shoutouts were posted in early hours and that might have got more eyeballs on the whole post. So starting from next week I’m trying to post again early in the morning to ensure that I can get more impressions and reach faster when I post. I also considered hashtags a boost alongside other facts to help out the posts.

Thank you for your reply @MojoJojo will do need your hashtags research in this coming year,is it still available?

I personally did make my own, but it never hurts to learn more from others.

Thank you for your reply @MojoJojo will do need your hashtags research in this coming year,is it still available?

People keep asking me that lately, maybe I need to update my thread to say STILL GOING STRONG ladies and gets lol

Happy to hear this, Mojo. Will contact you soon about it.

Does it still work when it comes to hashtags?