As someone who has been in the Twitter account business for sometime, I’ve had my fair share of account suspensions. I usually think there is no point in appealing, so I just count my losses and move on.

However, I decided to start filing appeals and surprisingly some of my accounts got unsuspended. But what is more surprising is the reason Twitter gave for suspending those accounts, and it’s always the same reason.

Here’s a sample of the email I receive whenever they unsuspend my account. 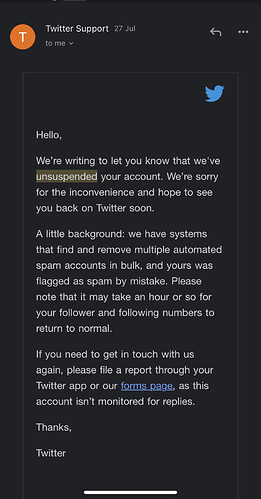 Although it usually take several days before you get a final decision from them, they sometimes respond very quickly. I recently had an account unsuspended less than 24 hours after filing an appeal.

I am happy to hear that @Djjoe. Why do you think your accounts got suspended? You’ve used automation or?

I rarely use automation, I only auto unfollow and auto delete old tweets once in a while.

For doing absolutely nothing

By doing nothing, do you mean having no activity on that account at all? I think I have one TW account that’s suspended and I was also wondering why since I haven’t used that account much yet.

Not exactly, what I meant was they can suspend your account even if you did not break any rule, hence the “flagged as spam by mistake”. I’m not sure they suspend accounts for having no activity. The only way to find out is by filing an appeal.

yeah, they are a little bit vague in that area same as many social platforms, in my opinion they have 20 % of random actions done hence the many mistakes that they make, but with that said never let your accounts goes to waste always appeal and see how it goes.