What are those accounts doing for growing followers?

first of all thanks for the great community here - I’m so proud to be a party of this!

In the last time I saw more and more accounts growing massive amounts of followers without doing any follow/unfollow like those two: 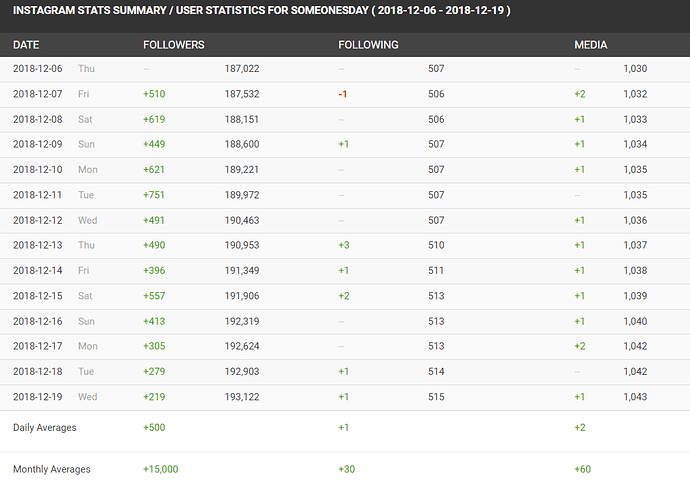 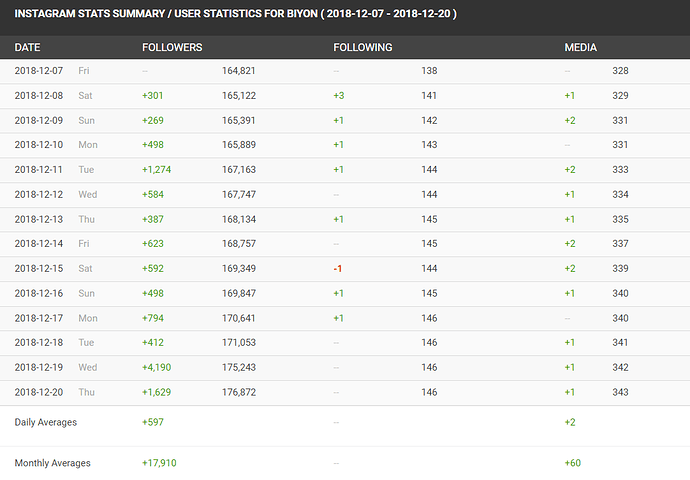 I was just wondering what they are doing to get such a massive growth. I know that they are not buying fakes because nearly all of those followers are from a very good quality and 70-80% of them are german accounts. I know that there is organic growth from their good and regular content but is it really so huge?

If you look at the historical statistics of the first account you can see that there hasn’t been such a huge growth all the time - so it doesn’t really look like organic growth just: 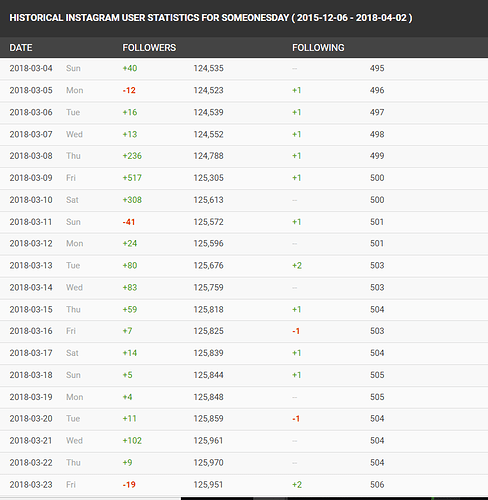 Do you guys have another opinion how they are gaining so much followers?

Thanks for your help and merry christmas!

What kind of engagement do the get?
I doubt it’s only through their posts, because they only do 1-2 posts daily.
Could be through fanpages/childs

The engagement on the first account is so so - definitely normal for a fitness girl account at this size - between 8-12k likes and around 200 comments in average.

The engagement of the second account is amazing - up to 800 comments on some posts (but in those posts he just call his followers to comment someone else). Also it looks like there are some fake comments too. The engagement here varies huge between 80-800 comments - depends on the post and text.

Here’s an example of one of my accounts that I’m only growing by posting 5 times a day, no powerlikes, no engagement groups, just good content which works in that niche. 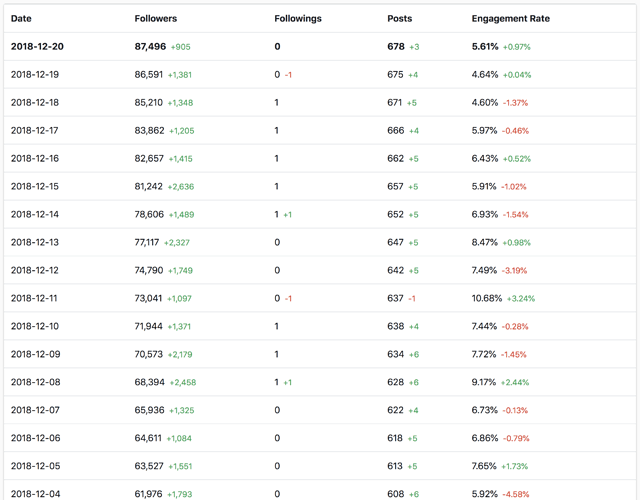 Content is King. Once you get the ball rolling you will get a lot of traffic to your page and if you post good content consistently, It’ll keep going.

Amazing results - congrats for that!

For the first account (the fitness girl) that’s maybe possible but for the second one I think it’s not because a friend of mine exactly posts the same content (same coaching niche, same quality, same frequency, same hashtags…) and just get followers by follow/unfollow without any organic growth itself.

Do you maybe have another idea?

I checked out his ig now… he has over 300k on FB and YouTube. He’s also already a celebrity. Most of the traffic and subsequently his new followers will come from external sources like other social media and press.

Thanks for your time - that helped me a lot and makes sence. It’s amazing how strong organic growth can get by the time with good content.

It could be that they posted several videos that went viral and still are.

I saw this on accounts of mine where I posted videos which got me followers for several days and engagement didn’t go down which resulted in even more followers.

Like @madcell said, using your other channels to promote yourself can also lead to increase in growth. (For example: Regular Youtube content brings in several followers a day, your tweets do too and you happen to post good content on IG, your growth there will fundamentally be better than a lot of other channels because you have multipiple sources of “income”.)

Taking advantage of all available channels is possible and with the right tactic doesn’t have to be as time consuming as you might think. As you progress you’ll get better and faster and there you have the concept.

I think one big thing could be Fan pages. With fan pages, you can boost your IG account save and good. For this, I would use JARVEE and set up around 50 fan pages. On them, you could use any fast growth strategy like F/U, Like, Comment.
Best Jay

I am going to be the one that says it isn’t necessarily authentic growth. They could be using hidden loop giveaways to grow their following. So many people do it that gain like this.

What is a hidden loop giveaway?

It is where they pay into a giveaway hosted by another account on another accounts page for some crazy big prize like I know someone joined an iPhone one. They never post on their feed but the host account has rules that people must follow everyone on a list to win.
It is called hidden because it is never posted on the accounts page so people don’t know at a glance that they are doing it.

Sounds like a good way to have lower engagement rate

As said before, content is king in instagram. Create outstanding pieces of content and explorer page and engagement will be enough. If you also use powerlikes it will skyrocket, but that could be expensive.

Do you know a good site for power likes atm?

Goso.io , I haven’t tested them too long, but the quality seems to be better than fuelgram. That’s also what I read in all the reviews of them I found