I’m on TikTok since a few days and my second video went a little bit viral (44k and still growing). I’m posting daily however my other videos all reach 1000 views in half an hour to an hour and suddenly stop growing further. What can be the issue? I’m not botting or anything and it’s all my original content.

I’ve already read that there has been an algorithm change where TikTok shows the content only in batches, but in my case they stagnate.

Keep trying to improve your content. How many times a day are you posting?

I’m posting 1-3 times a day! I’m a girl and actually doing the usual TikTok stuff that’s why I’m kind of confused what’s going on. Put a view vids on private though

just joking! what is your account? I can take a look.

I would like to suggest add views through bot after upload video. Cause when it will get views in fast time the video maybe will viral easily.

Terrible idea. It is just going to get your account shadowbanned.

its personal content. So usual dance videos, mixed with travel etc.
I can send you the link in private, maybe you could take a look as well

sure send it my way !

how do you add views through a bot??

I have a video that got up to 700k views and almost 70k likes in my second week of using tiktok. It went viral for almost two weeks. And gave me about 1000 new followers. I thought it would bring more followers than that.

At first I thought it would keep going viral but eventually it died out.

If your video is constantly being shared and in the comments and people are tagging their friends to check out the clip it will stay in the 4u cycle longer.

I find that if you are female you will get traction faster. Heck Charli D’Amelio went from 0 to millions of followers in a week from just uploading dancing and lip syncing videos.

Fill the description with 4u tags, Just keep doin what your doing. And have fun with making content. The good thing about tiktok is it has more comedy that IG. So keep posting and doing duets, eventually one of you vids will catch fire. But it’s a numbers game.

It’s a quality game, not a numbers game. Yes you can post more videos and technically you increase the possible chances of 1 of them going viral… BUT if you know what you’re doing, you can ensure that 2 videos can get big numbers, instead of 5 bringing in small numbers to accumulate to a larger sum. The more shit videos you post, the smaller your reach is distributed when you first post your content.

Do not fill in the description with 4u tags. They don’t do anything at all to help you out mate.

I think the key part here though is having fun making content. Don’t go into this super stressing that you MUST go viral. Shit like that pretty much makes it so you don’t actually end up going viral cause you’re so stuck in your head.

pls check PM i have sent the detail.

Yeah i feel the same way about #foryou I don’t get why everyone uses it. including myself.

One reason I thought it might work is TikTok is primarily little kids so maybe when they see #foryou they will like or comment that it was on there for you page.

The question is using #foryou actually hurt your video? I feel like if it actually got to the top of #foryou you would go super viral

IN short yes it does hurt you long term. As you rank for an audience type that isn’t consistent with your category / niche of your profile.

#FORYOU = You rank for say people who love cosplay. Your content is about bikes.
Your largest video goes viral under FORYOU, your audience data is skewed, the next week or two of posts are shit because they’re showing your content to the wrong people.

Did you manage to get past this 1000 views thing? Exact same thing is happening to me, about 1000 views on every video and then nothing.

Take into account that followers/following in general is not really what tiktok is about. Its power comes from virality, not from having a fixed list of people you want to interact with. This is a very different model from “classic” social media!

Hey, this is also happening to me. I have a much newer account so my stopping point is around 150 views. It doesn’t make sense to me because I’ll be getting this rush of views and likes, and then suddenly it just STOPS and I barely get one view trickling in every half hour. If the trend was continuing it would make sense to get more views! Clearly people are liking it so why would TikTok thing it makes sense to just stop that suddenly? One of my videos got 4,000 views, and I have no idea why that one was allowed to continue. The rest just stop around 150.

The rest just stop around 150

This is totally normal.
This is how the Tiktok algorithm works.
Here is a Picture to understand it better: 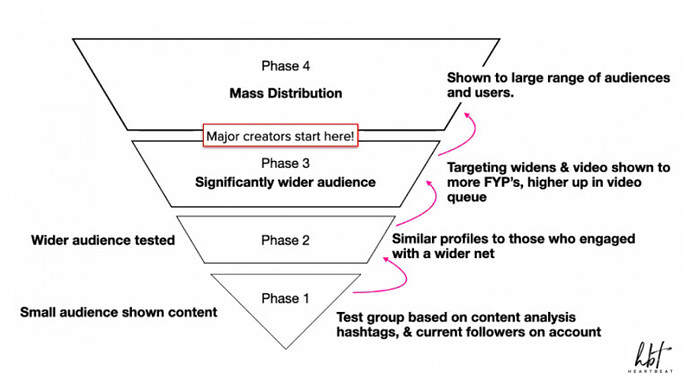 Its a Content Quality Game. If your Content sucks you will not get into “Phase 2” you will be stuck in “Phase 1” which is 100 - 200 views. Anything more is already in a higher group.
Engagement of every Group gets you in a higher “Phase”