Summer is well underway, but @delagarde and I have been keeping busy, building our own targeting tool for Instagram. With the first few tests and accounts populating our database, I wanted to make use of the data to do an in-depth analysis of Instagram engagement rates (in short: ER).

What you’ll read below are some findings based on a sample audience containing 16,5k accounts, all data has been collected between the 8th and 15th of July 2019.

In this post I will be answering the following questions:

Background on the data and tested audience

As mentioned earlier, to do this analysis, I took 16 500 accounts out of our own personal database and worked with their engagement rate and other various metrics we calculate. So for the broad analysis, I’ll be using the full audience size of 16 500 to share the metrics. However, in specific cases (like gender or business category), I’ll be using a subset of the total audience. But if that’s the case, I’ll mention it specifically.

I also mentioned earlier that all the data was collected between the 8th and 15th of July 2019. This is important to know, as engagement on Instagram isn’t set in stone, and can vary widely depending on the season, holiday or other events. There’s even a strong day-to-day change at times. So it’s really a snapshot in time.

To give you some additional insight into the buildup of the audience, I divided them into 9 brackets, according to the size. Here’s how the audience is built up:

Note: for some tests, I’ll be excluding small accounts (those with fewer than 1 000 followers) to test the validity of claims. But these accounts do form an integral part of the Instagram community and have a rightful place within the averages.

Although the overall engagement rate isn’t that valuable, it’s a good measure to determine what the status of the platform is. But this doesn’t take into account the different account sizes inside the audience, so it’s only that valuable.

For July 2019, the overall engagement of the tested audience is 14.17%. This is quite high, but can be ‘explained’ by the fact that the majority (±68%) of the audience tested has rather small accounts (<1000 followers), and those accounts have a rather high engagement by default.

If we leave out the small accounts (and thus 68% of the tested audience), the average engagement rate is 6.68%. Which is a huge difference, but more accurate to compare to for everyone that has more than 1000 followers. But the next section offers an even better insight into the averages.

To give more valuable insight into the average engagement rate on Instagram, it’s best to look at account size. In order to do so, I divided all accounts into a specific bracket.

As mentioned earlier, the engagement rate is highest in the two brackets that hold the accounts with the lowest amounts of followers. They tend to have (generally speaking) a more faithfull and active audience, with whom they often have a personal connection. This ‘effect’ tends to weaken off once an account gets bigger. And that’s what we can see in the chart below.

It’s often said that women dominate social media and get the most engagement rate. I’ve even read posts by so-called “guru’s”, claiming you should just create a female profile for your business, just to get more engagement going. Which is just wrong if you ask me, but let’s not go there.

While these claims are likely to be true for certain niches (think fashion, fitness,…) I wanted to test this hypothesis more globally and see if this was true or not.

When we look at the overall engagement based on gender, it seems that male profiles have a small edge over women. But, it’s only a marginal difference of 0.23%. 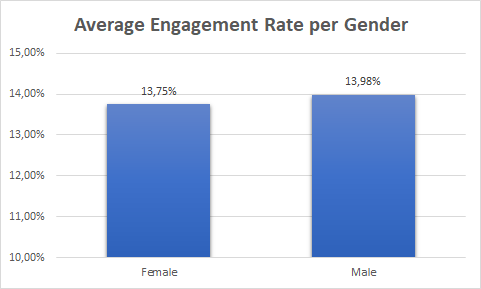 I also wanted to check if there’s a difference across different account sizes and gender. So going back to the brackets used earlier, I checked for average engagement of male and female profiles. 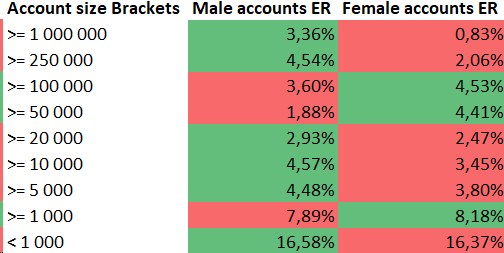 Business profiles (and now recently, creator profiles) are widely discussed for their (alleged) effect on engagement. This data set allowed me to test the claims that having a business profile has a negative effect on the engagement rate on Instagram. To test this hypothesis I studied the 8 000 accounts within the dataset that are classified as a business and have a category assigned. So it’s a test on about 50% of the total audience.

There are only three categories performing below the averages, and that’s “Geography”, “Home & Auto” and “Entities”. But since all three together are only a dozen or so accounts in the dataset, it’s quite possible that this is a very isolated issue. We’ll have to see how a repeated test of this on a much larger scale holds out to give you more a more accurate figure for these three categories.

Please also note that these aren’t all the available categories within Instagram, this is just a snapshot of whatever category was present in the dataset.

With that said, based on this piece of data, we can say that for 85% of the cases, having a business account doesn’t give you lower (than average) engagement. If you are experiencing a lower engagement rate after switching to a business profile, that’s most likely related to how you run the profile, as is being discussed in this medium post.

The effect of Story highlights on engagement

Now let’s get to the final question in this research, stories. Since introduction, stories have been quite popular and Instagram and having a growing amount of users (both creators and viewers). But does the use stories result in a higher engagement on your account? Well, it’s hard to say, mainly because it’s near impossible to track all accounts in my database 24/7 for stories and calculate the engagement rate with the stories data in as well.

So the next best thing I can do is to see if the account uses highlights (which are places where people can catalog, organize and show old stories to their followers). So I split all accounts in my database into two groups: one that uses stories (the blue bar), and those that don’t use stories (the orange bar). And based on this audience, we can see that accounts that don’t use highlights have a (much) higher engagement rate on average. 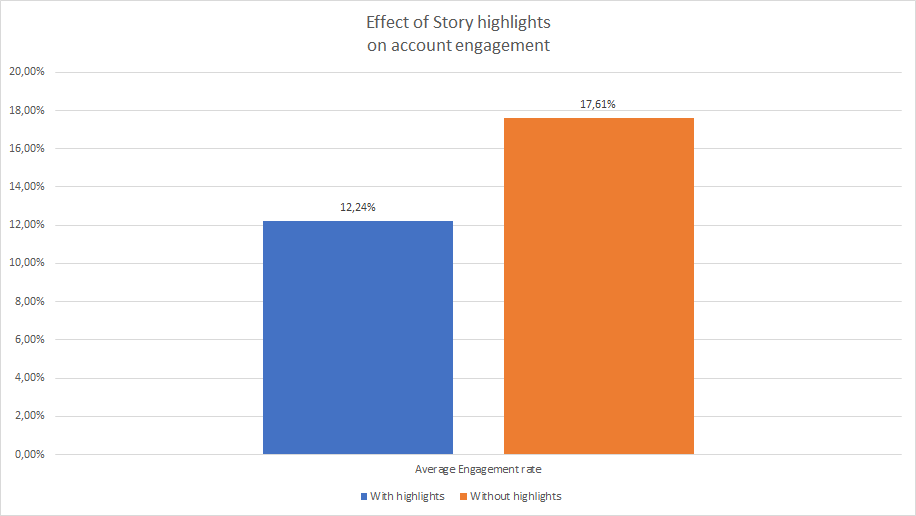 However, when we disregard the small accounts again (with < 1000 followers), we can see that the data moves the other way : 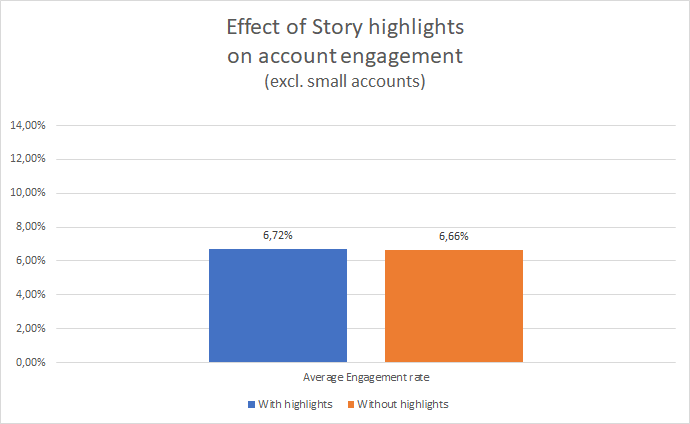 So if we disregard the small accounts, we can see that accounts using highlights (and by extent stories) do in fact have a slightly higher engagement rate than their counterparts (6.72% over 6.66%).

So just to serve as a quick recap, here are the measures captured within this experiment:

The niche specific targeting to find is not there as different niches are more active than others. Size should be used as the second basis if any of sample accounts are shadowed it might throw details way off. .
Excellent work and very detailed thank you!!

You are a Master, such an analysis to share with us

Thanks for the data!

Bad ass analysis here partner, and dispelling a few common myths with data. So many interesting findings, e.g. about the business accounts engagement level. This is why I love having a ton of data and metrics. Soon we will have a exponentially more data to run this analysis on to compare by niche and if findings hold up when analyzing hundreds of thousands and millions of accounts

DATA is the only key to get a bit closer to IG Engineers.
Great work and big thanks for sharing it.

Thanks a million for this data and taking the time to compose this post! I knew my 4% ER wasn’t that bad based on your information l!

Cool stuff! You sure can take this to new levels too! Love it!

Thanks a lot for putting the effort into this you two!

Unfortunately, it didn’t bring up any really interesting conclusions especially as you were looking at mainly irrelevant accounts (small accounts)…

Are you a wizard or a liazard ?!
Thanks bud this is an awesome share i had pleasure to read
This girl profil myth is finally down

Does this accounts are yours ? And if yes, what do you do with that many ?

Love this post man! Bigger accounts will always experience a lower engagement rate as they approach maturity but its really surprising to see the gender analytics and their engagement rate.

Thank you so much for sharing, this is a great amount of data! Makes my engagement rate not look so bad anymore, I remember some people saying that a 10% eng. rate was the normal a while ago!

Exactly.
And now I see that 2-3% is a very good result if it is so in these times

one of the social media sites did a study of age and ER – 13-18 age range commented the most
as you get into into the brackets of age – the older they got the less they engaged. To bad we can’t get the age in this study.

The big question for me has been the effect of stories on engagement. However, without some sort of view into the combination of story + post engagement, it remains an assumption that regular posting combined with stories may result in higher overall engagement.

It would also be interesting to get a view into post frequency and the effect on engagement and overall reach, particularly on a niche level.

Again, solid analysis. I think people underestimate the value of collecting data to benchmark engagement for their niche. This can really help shape the overall content strategy and should be a guiding force to help an account reach maximum potential as quickly as possible.

Thank you for your efforts! This is really good.

this is pure gold !!! thanks for sharing

Very good work! Thank you very much for sharing !

Wow well done! Can’t wait for your project to near it’s end! Targetting has always been the issue for what we do, getting that pinned down is going to complete the circle.