Hello everyone! Since a couple of users asked me questions about how I improved what supposedly is my “trust score” on Instagram I decided to elaborate on what has been my journey up to now. I’m not a native English speaker, so bear with me if something isn’t clear – I’ll be reading comments if you have any questions.

Intro
First of all – I opened my very first instagram account in October (fine wines niche), did PV, linked to my Facebook account and all that but didn’t start doing activity before 03/11. At the time I knew nothing about MPsocial, automation, BH/WH techniques, Instagram marketing. Nothing.

I started by transitioning what I’ve been posting on Vivino (where I have a small but high quality audience) and following same-niche accounts, but quickly realized my content was boring, despite being original and high quality.

So I started reading about Instagram growth methods, and stumbled upon F/U. Which I did massively, following 500+ people per day. ER was great (around 25-30%, with relatively big hashtag reach), and I was getting 180 story views with 350 followers.

The block
I ended up getting a 7-days hard block few days later, which was definitely discouraging, but at the same time it gave me space to find quality resources about instagram growth. That’s where MPsocial comes in. I spent a lot of time digging through old threads, and absorbing as much knowledge as I can.

After the block I knew I had to resuscitate the account (which was sitting at 500 or so followers, back then). First posts were a disaster. ER was halved, SV were more than halved, external reach (non-followers) was 1-2%.

How I played around it
First of all, I literally stopped every F/U and spammy action. No exceptions here, you need to get clean in order to recoover.

Most of the people on mpsocial agreed upon the fact that good ER is a solution to low “trust score” (or whatever you wanna call it), so I decided that was my priority.

I used Ads (abusing the pause feature to spend little to no money and work around “hot” hours) to promote every single post that didn’t get enough traction, until it got to a point where the number of likes/comments met my criteria (at least 20% of my follower base). To achieve that I set a 5€/day budget which I paused during rest and work hours.

Another thing I did was promoting my posts (1€ 1 day) as soon as I posted them. That way I forced instagram to expose my contents, even if I was “shadowbanned”.

I ended up spending €8 on Ads, total, to achieve a satisfactory engagement rate.

Part of my time during the block was spent looking for viral content in my niche. Three days after the block was over I posted something that was relatively new within my niche, during peak hours on Sunday, promoted with 1 euro as always. Basic hashtags, nothing over 500k. Well the post skyrocketed, giving me a reach of 14k with only 800 followers. Almost 600 likes! Hooray.

After that post went viral my hashtag reach was doing good. Still not like the pre-block times, but good. My posts were visible on recent from non-followers, I was getting hashtag reach. All in all, I was on my way to “restoration”.

I also worked on the sense of community, tried to create connections and friends. Started a laser-focused engagement group with other fifteen (and growing) other 1k-10k accounts where we all know each other and actively work on collaborations. Mutual shoutouts. Comparative wine tastings. You need a bit of creativity here!

The focused engagement group helped me getting even more hashtag reach. My last 6 posts, of which only one is “fun” and “viral”, are averaging really good numbers (engagement rate on those is around 27%). Posts that I never believed in (very technical, not something a lot of people can enjoy) ended up on Explore.

Summary
I was able to get 1.1k followers in my very first month of Instagram, learning from scratch and getting a hard block that I managed to work around. I guess you can say I “restored” this account by using a couple of tricks that ended up working.

Thank you for this wonderful community.

Edit: Some of my posts data. I attached both viral and normal posts to see what it looks like using this method.

Edit: My followers/engagement rate stats. You can see the numbers rise right after the hard block. 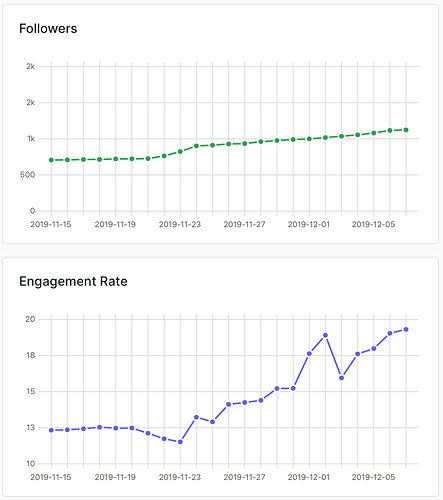 That’s really interesting ! How did you know that you got out of the ban imposed by Instagram? Also did you promote your posts straight from Instagram or did the ad setup form Facebook? did you use a specific target for the ads or just generic?

Good share. I hope many will read it and take notes from it!

Good share. I hope many will read it and take notes from it!

Thank you very much!

That’s really interesting ! How did you know that you got out of the ban imposed by Instagram? Also did you promote your posts straight from Instagram or did the ad setup form Facebook? did you use a specific target for the ads or just generic?

I used a specific, laser-targeted audience for my Ads.

Finally a good vibe from someone that start after the June wave, good luck for your journey mate

Finally a good vibe from someone that start after the June wave, good luck for your journey mate

Keep in mind I had to do a lot of research before getting such results! And I made MANY mistakes along the way!

Great guide! Did you used automatic placement or did you fill in the target group yourself when setting up the ad?

I set it up myself with very precise criteria.

So what are the numbers for the posts that are not sponsored?

I would very much be interested in hearing that from you!
and thank you very much for the thread!

So what are the numbers for the posts that are not sponsored?

None of the posts I attached was sponsored. 100% organic, nothing paid.

I would very much be interested in hearing that from you!
and thank you very much for the thread

1)Not sure if I interpretate your screenshots right. You said you lost ER and had no hastag reach. But there is no screenshot showing this situation? I would than expect the hastags reach being only your follower seeing the post. It should be very low like 10 or 20. It was like that?

2)Also i realize that your one post got saved 81 times and the other on 66 times in comparison 500-600 likes that is a very high number imo. Maybe in Art photography it is different or your content choice (is it the unenjoyable very technical stuff?) was very saveable.

3)Using ads: but doesnt it take too long until they are confirmed. I mean to reach top or even explore the Engagement should happen in the first minutes/hours. Or am I wrong on that and you go to explore after some days?
Even if you do it as soon as posted it takes sometimes whole day and than in the middle of the night they start. My posting sweet spot is afternoon…

3b)Did you experience that just ordering the ad would show your post in the hashtags more even if it is not running yet?

Funny thing enough beyond trust score what you did is exactly what organic accounts should do that aren’t even automating, this is how you grow an account manually

Actually would love to compare with my problems.

If its to complicated it is enough to tell how the number from hashtags and startpage was.

Keep in mind numbers are inflated because of the success of more recent posts.

Funny thing enough beyond trust score what you did is exactly what organic accounts should do that aren’t even automating, this is how you grow an account manually

I don’t understand, should I be doing it differently?