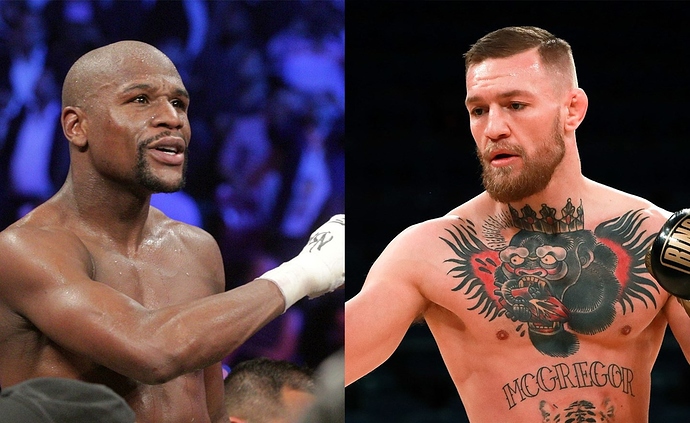 Who is going to win?

If there are gamble lovers like me. Then this is your chance to earn a lot of money with very little deposit. 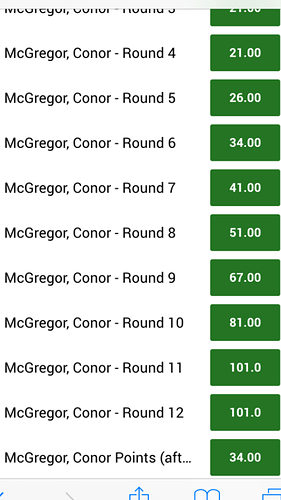 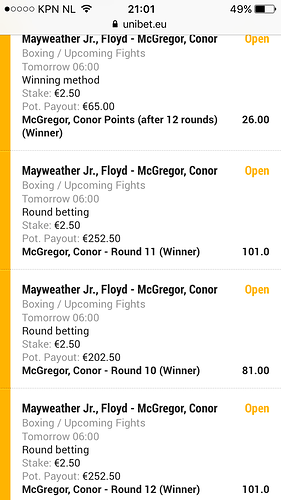 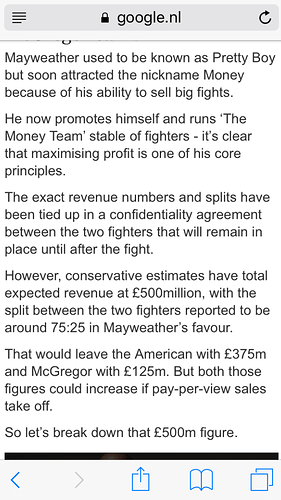 McGregor will be down before the 9th if he even makes it that long.

He is in another world there. He has a mean left, but he also is not a pure boxer. This is pure boxing.

I want McGregor to win, but that would be like putting a frisbee golfer on a golf course and expecting them to beat Dustin Johnson.

It will be fun to watch no matter what.

Does anyone know the best place to stream it for free?

EDIT: McGregor also does not have the same stamina as Mayweather.

EDIT to my EDIT:

Prop bets are the way to go here, odds on those are:

He is in another world there. He has a mean left, but he also is not a pure boxer. This is pure boxing.

True, if they do MMA McGregor 100% win in max 2 rounds.
I think Mayweather will start slow not take big risks and after 3 / 5 rounds is McGregor fcked… and it will be easy.

I have this bet ( placed by mistake ) 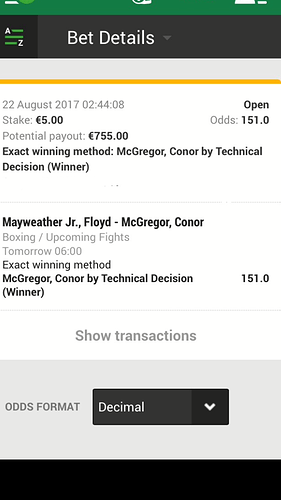 I think Mayweather will win. But still i bet on McGregor👇

McGregor is tough and knows defense, so it could go as long as 5 rounds. The odds for minutes of fight are excellent. Prop bets and betting how long it will last are the way to go.

From which site is the prop bets you sended here? Odds are awesome😍

I don’t have much options where i bet

Scroll down to the “how long will the fight last”

How to calculate the odds.

You can even bet on how long it will take for them to sing the national anthem.

How long will it take for Demi Lovato to sing the national anthem?

Uninet has higher odds i think i will compare it now.
But bovada has much more options/bets 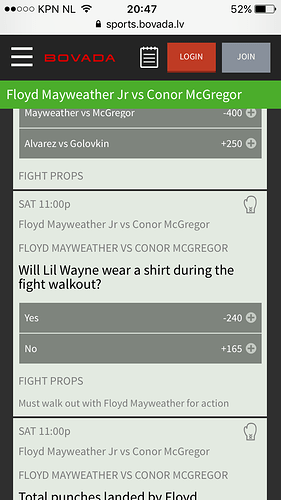 Conor McGregor showed he’s got a bigger mouth than Floyd Mayweather, Now he has to prove it on the ring. But i think ‘Money’ will win.

Hah I bet they are streaming it somewhere for free, if I was an American I would never pay 100 fking $$$

Being Irish I guess I should support McGregor but to be honest he’s a bit of an embarrassment. I can only see Mayweather winning but it will be interesting, McGregor is a bit of an unknown entity. If he lands one of his left hands with a lucky shot, he could have Floyd on the back foot but that’s a big if… Mayweather will probably sit back and pick him off round by round as I don’t think McGregor’s defence will be up to scratch.

Hah I bet they are streaming it somewhere for free, if I was an American I would never pay 100 fking $$$

I am hoping someone comes through with a stream link that will work.

I am hoping someone comes through with a stream link that will work.

Btw if someome stream this live via youtube you will have looooooot of new youtube subscribers.
Yes it’s illegale but if you film it with your own phone and see the TV it’s legal. Correct me if i’m wrong😬 It’s low quality but still good enough.

i know people who does that with football matches and they dont get banned/kicked and I also saw it with instagram live. I dont kow if its legal or not.

Got this from a buddy. (NOT AFFILIATED) 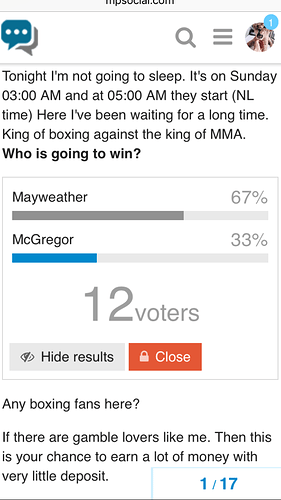 I’d love to see McGregor win but it’s close to impossible. He will get outclassed. Mayweather is capable of finishing this in the first minute. They will probably go for more time just to give people the show that they paid for.

Conor has a really low probability of winning in a boxing match. If I was betting I’d put my money on Floyd.

What will this do with the bitcoin value? If he buys $ 50 million for BTC? Since he will earn 200+ million this evening. Whether he wins or loses does not matter. 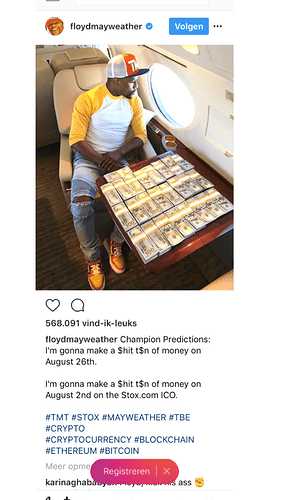