So... how are you all doing today?

Just makes me think out loud about the world we live in, and what we’re doing here as a community and the IM game. It’s like a vacuum of digital existence, sometimes completely separated from the real world. Things “out there” are getting more fucked up by the day.

Sure, it’s always been crazy throughout history, but not in the same ways… society is always inventing more ways for you to just stand back and shout WHAT?!

Anyhow, with all the shit going on, how are you all doing? How’s life treating you?

Wish we could all take a time-freezing pill and fix this broken society we’re living in, but in reality, it’s only going to get worse before anything changes. The negative pessimist in me expects it to never improve, but I’m still hopeful that it will.

Wish we could all take a time-freezing pill and fix this broken society we’re living in, but in reality, it’s only going to get worse before anything changes. The negative pessimist in me expects it to never improve, but I’m still hopeful that it will.

imo it’s not the times, but the media. Now that we have internet and every little shitstorm irl means likes and cash on the internet )

True, but you’ve gotta admit there’s some crazy shit going on, even if the media likes to blow it all out of proportion.

What kind of magic dust have you been smoking?

Is there a chronic cloud floating over Israel right now?

@Ian:
I like this kind of thread, so thank you for that. And yes, you are right, we all have the impression that the world is kinda f***** up currently.
But @mindeswx has indicated, maybe we all have just a wrong impression.

Look at the former times:

I have recently read that (even though or impression might be totally different), the chance being killed during a terror attack has decreased within the last 20 years…

There is a lot going on currently, and many people are suffering all around the world, yes. But most in Europe and in the U.S.A. have a good life. And if some of us have the chance to change the live of some poor ones (people, animals or plants), then yes, we are capable to make a good contribution to the world

Yes, that’s all accurate, but you would think as we evolve as a society that we’d learn to better ourselves, and resolve these sort of ingrained human flaws, with our civilized ways of life. But it feels like we’re going backwards right now.

). And some of us may have also the chance to make really a change in the world.
There was a man from Portugal (name: João de Deus, also known as John of God). He decided about 500 years ago to take care of people with mental or physical disabilities. Because at that time, most people with such disabilities didnt receive any help. And what John did, this impressed others and they followed him. Now, all over the world there are buildings for people with those disabilites. Not only in Portugal, but also in Germany, Austria. And even in India.
I just looked on Wikipedia, look where John’s organisation is active now - its astonishing: 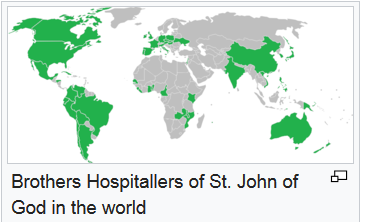 This is what one man has started

So, what I wanna say is: Slowly John drew to himself a dedicated circle of disciples who felt called to join him in this service. He organized his followers into the Order of Hospitallers, who were approved by the Holy See in 1572 as the Brothers Hospitallers of Saint John of God, who care for the sick in countries around the world. One mark of honour to his labours is that this Order has been officially entrusted with the medical care of the pope. When St. John of God died the successor of the Order was Pedro Soriano. The Brothers Hospitallers of Saint John of God (officially the Hospitaller Order of the Brothers of Saint John of God; abbreviated as O.H.) are a Roman Catholic order founded in 1572. They are also known commonly as the Fatebenefratelli, meaning "Do-Good Brothers" in Italian, the Brothers of Mercy, and the Merciful Brothers. The Order carries out a wide range of health and social service activities in 389 centres and services in 46 countries. John of God, the founder of this religious Order, w...

How are you today, @Ian?

Just got a fever and body aches last night, randomly sick, some kid coughed in my face at the supermarket a few days ago because she was carrying him around the produce section at eye level. Probably what fucked me over, damn kids. DAMN IT ALL TO HELL.

Reason #256 I won’t have kids. They are just breathing germ factories.

My immune system is so bad, whenever I ride the subway here in NYC I get sick, winters are the worst. I really need to figure out a fix, but don’t think there is one beyond not being alive.

Sure kids are bad, they crawl around and what not, but I think you somehow build a tolerance up to them, I’d hope. Then again parents are always sick with young kids.

i am doing pretty well thanks. lots of crazy fires in NorCal too. hope everyone is ok there and we can get through this crazy October.

The summary of world news you posted makes me think of the TV Series Black Mirror.
My thought is that stuff always went on in the world, but there was no way of making it go global like we have now.