Trump to ban Tik Tok in U.S as soon as Saturday?

So trump plans on banning tiktok within the next 24 hours in the US.

Any thoughts if this is real? And good opportunity for a US compliant company to make a similar app. I’m guessing FB will jump at the opportunity.

Will everyone be keeping their accounts. I closed my account almost 6 months ago and was about to reopen but I guess not now.

What will happen to this Tik Tok marketing group if it is banned? Will admin close it down? 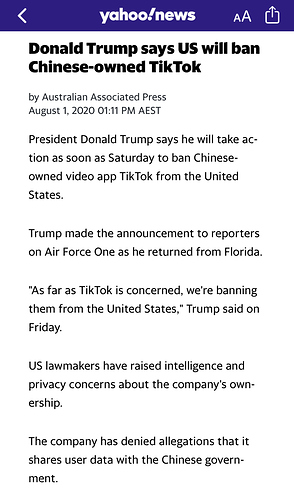 How to ban? remove from App store and google play? Ok, ppl will download from alternative markets. Appgallery is great.

Really? If they remove it from the App store and Google play most people will be clueless about what they can do.
The same with blocking IP’s. Of course, you can use a proxy to bypass an IP block. But again 99% of the people will not understand this.
If they lose 99% of their audience the platform will become useless for marketing things immediately.

They will dilute TikTok US shares instead of banning imo

Do you really think that the US government will just remove the app from the app stores?

yes, they cant do anything else.

You really can’t think of anything else?
Hint: ban tiktok for all US IPs

to increase demand on proxies?)

Do you really think 14-16 year olds will invest in proxies/VPNs to access TikTok?

Use your head my dude

Finally one good move by the US and Trump. Same as Chinese communist government blocked and not allow FB, Twitter, WhatsApp and many other US and western companies to work in China, their platforms should be banned in the US. But thats just my opinion. And most people won’t use any tools and tricks to bypass the ban, or they not have any clue about it.

So Boomer company Microsoft plans on buying Tiktok now. That’s a good thing for IM money earners who were starting to see potential in the platform.

looks up and running to me did the hammer fall yet?

Not yet afaik. From what I understand this is a political play. Trump wants the current owners (ByteDigital?) who are china based to sell the app to a US company. My guess is he would rather have all that secretive data collection be part of their intelligence network and not china’s.

I wouldn’t put it passed him to do the ban if they won’t sell but if they do sell then the app will stick around. Of course if he bans it even if the ban lifts later it’ll be too late…the damage will be done. But that would mean IG would scramble and release Reels to the US to take over that marketshare asap

r/videos - Not new news, but tbh if you have tiktiok, just get rid of it

TikTok is a data collection service that is thinly-veiled as a social network. If there is an API to get information on you, your contacts, or your device… well, they’re using it.

App behavior changes slightly if they know you’re trying to figure out what they’re doing. There’s also a few snippets of code on the Android version that allows for the downloading of a remote zip file, unzipping it, and executing said binary. There is zero reason a mobile app would need this functionality legitimately.

And a whole lot more

I’m so confused by all the contradicting information. CNN says no deal for Microsoft.
And there are tons of 9 year olds crying and uploading farewell tiktok videos. 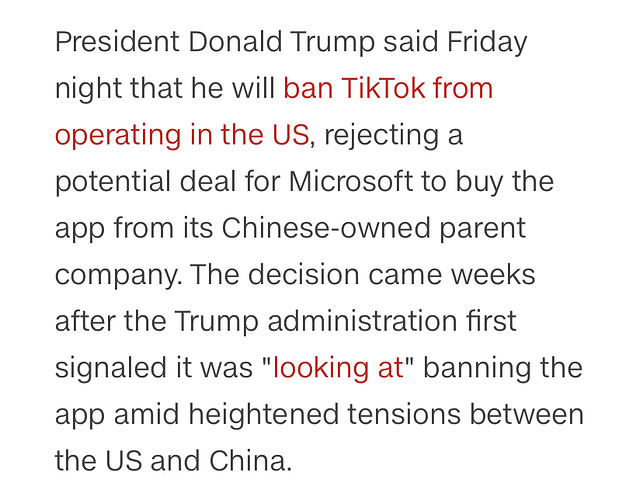 i know this one dumb idiot that was trying to bet that tiktok won’t get sanctioned/banned by end of year.

yep… the Communist China can’t even complain, since they blocked and censored every social media platform. Should’ve been done earlier but Obama was weak af on China so