Who else tries to do this?

I reach out to hotels wherever I travel, suggesting a collaboration of free accommodation in return for content advertising the hotel.

I plan to make a food account and do the same with high end restaurants when it gets big enough.

Could the same be done with airlines?
Who else has saved on their travels using their “influencer” account?

I’m assuming you must be quite large. I remember a while back an influencer got roasted for doing this

WE ALL love a good freebie, but this social media influencer picked the wrong hotel owner to try her luck with.

If your content is interesting enough everything may be possible, but somehow I doubt bigger airlines giving out free flights.

Alot of businesses and companies who tend to do give aways earlier are becoming more critical nowadays, as many so called influencers have been busted using fake engagement.

I’m totally positive that an airline won’t give you even a discounted fare.
Hotel could be …only if you can directly communicate with the owner, there are many small hotels like that, but your Followers don’t matter anymore, businesses have clear understanding of ER now. If you have a good one go for it!!

I receive offers sometimes due to my other job but so far I haven’t accepted them.

Hotels and airlines regularly work with influencers. Most influencers I know ask quite a few in the location and may get one or two offers. They expect quite a bit in return, and normally only offer 2 nights - so depending on how long your visit is - you may have to swap hotels. It doesn’t make for a relaxing holiday in my opinion.

Food works as well, most of the larger locations have a tourism board with a media page and they know who works with influencers. Could save some time.

You actually need to pay tax on free stuff, at least here in Europe.

So if you get free food for example and you actually eat it, you need to pay the government for that

Please show me one Airline “working” with influencers. They spend millions in traditional advertising. (Please don’t mention any personality well known outside of the social media or IG world) I work with the major Airlines and I never heard of anyone traveling for free. But maybe some low cost small domestic does it.

I got sponsored once by an an airline but they wouldn’t pay the airport taxes and I had to pay the flight from the city where I live to the airport where it operates. In all these years it only happened once. I eventually refused because it wasn’t worth the

I actually had to spend to fly for free. No major airline as far as I know needs influencers.

I’ve personally worked with Spirit, and southwest just did a huge #southweststorytellers campaign.

I also regularly see Delta and United on the influencer app Popular Pays. 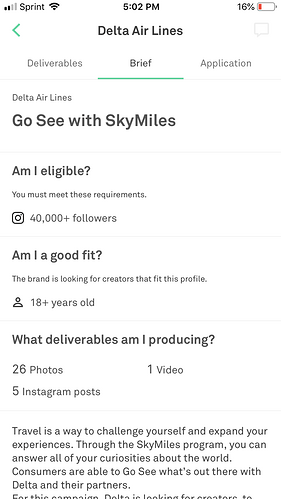 I’m totally positive that an airline won’t give you even a discounted fare.

Big youtubers can get. Even 1-class plain ticket via Emirates airlines so you can film yourself. There are many youtube influencers who get free airline tickets. Haven’t heard any Instagram influencers that gets those for free

One of my clients was in traveling niche, gets tons of free hotel stays. But he never earned a dollar from his Instagram account, only free stays. He is thinking now how to monetize the account, and those free hotels (even 5 star hotels) got boring for him (because it’s a job, not a relaxing moment)

I’m also not seeing a lot of monetization in the travel influencer world, unless you are super big. I get press trip invites often, which are a lot of work, but the minute I request pay they shut me down and I’m over 200k.

I get invited to multiple fashion week shows and other awesome events across the globe thanks to our instagram brands. Truly opened a lot of doors for us.

Looks kinda hard to make a living from the Travel niche.

I thought around 100-200k photographers and digital artists could easily make a living from it, by getting multiple job offers, that would be willing to pay them the trip for example.

I guess it might be possible. But then it’s not only an “IG account”, it’s probably needed to bring more value to it (photography / art / or selling something idk).

I’m talking about free flights. They almost never do it directly with influencers. They usually work with company that provide FAM trips.