Not getting enough reach from your Hashtags?

Well if you are stuck using bad hashtag sets, or worse banned hashtags – you wont appear in hashtags at all.

You need to be real here and target Hashtags with the right popularity for your account. Be smart about it and try testing out different hashtag strategies.

My personal favorite is the ladder strategy. It’s about utilizing smaller hashtags to get more exposure, which in return leads to more engagement – helping you rank on the bigger hashtags even at a smaller following.

To make things easier I made an explanation on what hashtag sizes you should use depending on your follower count:

Do you have a hashtag strategy? If not will you be using the ladder strategy from now on? 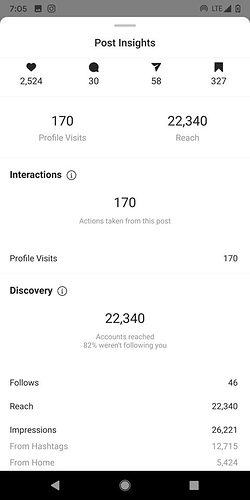 will give this a shot, thanks for the quality post, do you now of any other strategies?

Like the exact same hashtags for two days in same week?

I had never thought of this strategy… what do you mean by banned hashtags? Are they the hashtags where our posts don’t appear/our account gets shadowbanned? I think when i get shadownbanned, my post doesn’t appear in all hashtags I added.

If you use a banned hashtag your post won’t show up for any hashtag, simple as that.
Remember that there are two types of banned #s, permanent and temporary.
I would like to add also that if a hashtag you used and was OK later becomes banned the post will not show in hashtags anymore, you can fix it removing the banned hashtag…
Be careful with trendy hashtags as IG can ban them anytime, due to spamming or user’s reports.

How do you guys check if a tag is banned or not?

You can use a tool like this:
https://iqhashtags.com/banned-hashtags
or you can check it on IG

Also you will see only TOP POSTs and not “Most recent”

I use a combination of both methods.

There are a few more too, if you know a bit of programming, using Instagram json endpoints.

I’ve been using this, but only getting 1-3 impressions on tags

How’s the initial engagement on your posts? Or you may be shadowbanned

Maybe the hashtags you’re choosing are too big. You might be better off with more in the 5K-50k range and a few up to 100K

these are al like 10k, i used to gain big with these, now i dont

If you want to DM me, I’d be willing to take a look at your account and help you pick a few hashtags for free

question: is a hashtag banned when you go to it and there are no top posts, but it says “see a few top posts each week” an example is #hairyhunk you can see that message. I used it for my dog !

I can that see hashtag posts so the problem is that you used it for your dog and it is irrelevant to your post, also your posts might be reported, the posts are all related to hairy men with not much clothes. So I imagine that somebody from that community didin’t like to see a dog there

this is great! thanks for sharing!!

How do you check how much count a hashtag has?
Also, do you post the same hashtags in all or most of your posts? (I have heard you shouldnt be using the same hashtag for a week once youve used it…)