Has anyone received any warning message on the top of homefeed about follow-unfollow or autolike? I have just seen it on one of the account this morning and it basically says we know you’re auto-follow and we will ban you if you dont stop. After an hour I got follow blocked - I have been following at the same speed for an month and it’s a tolerable speed. Does anyone have experienced this? Any advice on what to do with it?

My clients are getting a new alert on their Instagram today. “We’re removing Inauthentic Likes and Follows” "It looks like you may have shared your username and password with an app offering followers or likes. We’re removing activity like new followers from these apps to protect our community from inauthentic activity. Change your password to stop them from accessing your account. " I have these clients on Jarvee each with their own proxy and only 2 out of 70 clients got this. Are you expe…

Yeah a lot of people are getting that, doesn’t seem to be much to worry about at all.

there is also another thread about it https://mpsocial.com/t/ig-we-are-removing-inauthentic-likes-and-follows-is-back/63407/115 . But you have to write some helpful comments first that you can see it

How about this - After an hour after I saw the message I got follow blocked - I have been following at the same speed for an month and it’s a tolerable speed. Is this something?

Potentially yeah. Most people report no consequences after getting the message but there are so many variables it’s hard to conclude anything too specific

My Clients just got this message today. But only 1 out of 10 got the message. So hmmm… I think I will use one of my dummy accounts to test it and see if software will still work.

I got that message and now another one this week that keeps popping up. I have changed passwords and turned off jarvee but it is still showing up. I am NOT a technical person so have no idea what to do. Help would be most welcomed! 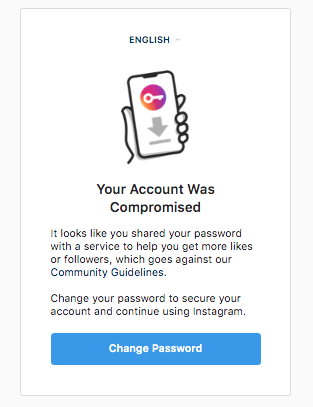 Change your password as it forces you to do.

I did. After every time it tells me to do it. There seems to be no reason it keeps popping up though. I’m manually liking some posts but not a lot. The only following source I have - although now turned off after first warning - was jarvee. That’s why I am so confused what is happening.

Hey could you please describe your timeline with actions taken? I’ve done the same with some of odd activities going on my account in the below post. I think if we collectively record the facts of our account, it can leverage the help from the community to understand the picture a bit more clearly.

Lol this is EXACTLY why I’ve chosen not to do ANYTHING with my account for 6 weeks. I’m literally watching what’s happening to everyone else’s accounts after my follow block was lifted cause way too many bizarre things are happening.

Sure. I use jarvee for f/uf. So, it’s on 5 days a week and uf two days a week. Same days. I don’t use the like feature. I know I am barely using this tool but I don’t know how to do other things with it. Sad to say. I have a mac so had to get the Amazon web services. What else do you want to know?

Hey could you please describe your timeline with actions taken? I’ve done the same with some of odd activities going on my account in the below post. I think if we collectively record the facts of our account, it can leverage the help from the community to understand the picture a bit more clearly

Well, my situation is actually pretty simple since it’s on my own personal account. I had literally stopped using Jarvee around May 4th after only using it for one month because I got shadowbanned. My shadowban lasted 18 days. My engagement tanked, and still didn’t pick that much up after the shadowban was lifted, though I did appear in hashtags again. I continued to f/u but I did this manually from my phone from May 4th to June 4th. During this month, my f/u was so random it’s barely worth noting the details. I basically followed anywhere from 40-50 people randomly whenever I remembered to do so as long as it had been at least one hour since the last time I had followed people. Sometimes I would follow 150 people that day. Then maybe not follow anyone for 2 days. Then maybe follow 300-450 people the next day but never went over 450 follows, and normally was really only going about 300-350 follows every day or other day. Like I said, completely random because I would just squeeze these activities in when I had time and could remember. I also continued to engage with some of my followers that are my friends by liking and commenting on their pics and watched the stories of my friends like any normal IG user because it’s my personal account. Then, EXACTLY one month later, on June 4th, I went to follow one person and I got the “Action Blocked” message not allowing me to follow any profiles. I was able to follow hashtags though. I was also still able to like, comment, and send DM’s. I also noticed I was able to follow big accounts like @jlo or @instagram (well played Instagram lol). Then, exactly 8 days later, my follow block was lifted. Since I would keep track every day of my follows, I counted how many people I had followed in those 30 days from May 4th to June 4th and it was a little over 5,300 follows. I decided to not do f/u for 6 weeks from the start date of 6/4 to see if this resets the trust on my account after reading the paper that was posted in one of these forums. I think I said everything lol. Tried to be detailed here. Hope that helps. My finger is tired now lol.

So you did little to no API based f/uf. How big is your account in following when you started using Javee and how many password forced change have you done so far? What happened in between those on your end - what’s the volume of likes?

I’m not using Jarvee but Follow Adder (FA), and even with this software’s recent update in an attempt to counter IG’s new third-party (3P) recognition algorithm, it’s still failing, as I understand almost all 3P software is - even if running off your own computer.

FA just dropped this new update which they claimed would counter the new IG algorithm by recognizing when IG started it’s blocking actions, by ceasing software functions for approximately 24-48 hours, and then beginning to like, follow/unfollow, comment, etc. all over again. (Which basically means they figured out Instagram noticed when their blocks would be ignored by 3P software, and would continue to like follow, etc. even though IG was blocking this - a clear indication to IG of “automation.”)

I found the new software update/approach to counter IG worked for about two or three days before I got the IG warning to change my password because a 3P group had access to my password (IG’s polite way of saying we know you’re using 3P software - don’t!)

Essentially, it seems that IG can now detect all 3P software that’s coming from your computer. It seems to be able to discern the difference between what you post and what 3P posts.

Until the 3P folks can figure this new IG algorithm out, may have to do this stuff manually, or risk the consequences.

We used FA for long time, happy with all and the support as well, but unfortunately we had to cancel the subscriptions, they contacted us a few times trying to explain the updates coming in the future but we decided not to wait.

We are going to the manual route as well. With several approaches, we are in beta testing now.

Just as a follow-up to this post about Follow Adders new update to counter IG blocking them; it still does not work.

Each time you retry Follow Adder’s (FA) next fix, IG shortly catches wind of it, and then becomes even more aggressive with the blocking actions towards your account. In other words, they keep upping the ante with each newly released fix you decide to try.

I would not attempt to use FA until you hear of others having more success with their updates/fixes/patches etc. I won’t at least.