Why does my api keep getting blocked?

On multiple accounts for the last week or so I’ve been running into non stop api blocks and jarvee keeps having to follow through the embedded browser even when I have it checked off not to do so. Now Before you say it’s my proxies I’m using raw mobile and it’s happening on accounts running very conservative action and pretty normal actions and I just can’t figure out what’s causing it. And to make matters worse every time jarvee switches to the EB I get action blocked

If your settings really reflect what you want, then maybe open a ticket with Jarvee support, so they can look into it.

Is that a fresh account?
How many followers / following does it have so far? 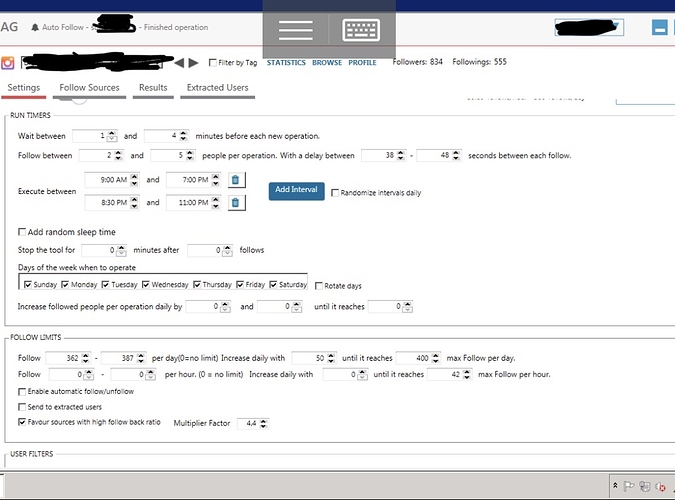 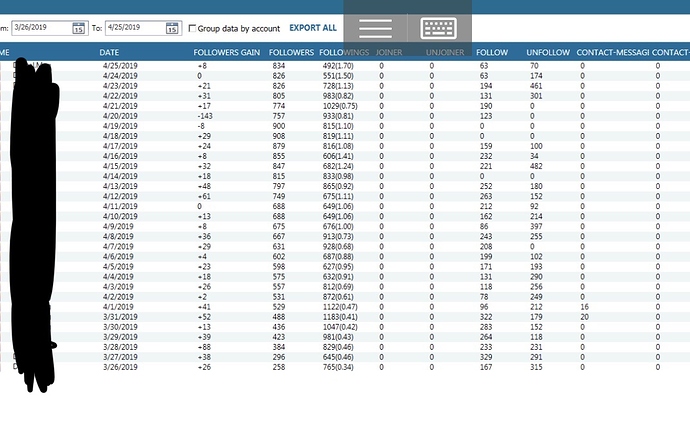 The account was created using via usb tethering my 4g phone to my Mac using chrome with the random user agent extension and webrtc leak prevent toggle and ghostery And it was profiled at creation.

I’d start by looking at your api calls. Perhaps you’re producing far too many: The problem with hitting API blocks routinely is Instragram is suspected of lowering the API ceiling for an account when it keeps hitting that ceiling. Meaning if you’re routinely hitting the top, that top starts lowering and continuing to a point you’re being blocked most of the time.

Once you find a level that is no longer being regularly blocked, slowly raise them back up. For me whenever API blocks are an issue, the dedicated scraper account resolves it 99% of the time.

I have been having a similar issue with a couple accounts. Here is what I have tried so far.

Logging in via embedded browser and preforming some actions (view stories, a few follows, a few likes) then starting follow tool again did temporarily lift the API block, but it came back the next day.

Next I upgrade proxies to 4g Mobile from SSL, this by itself did not fix the issue.

Then I tried resetting the device id, this did not help either.

Then I let accounts rest for 2 days and lowered follows per hour to 40 from my previous limit of 50 but with a warm up starting at 10 per hour and increasing by 10 per day. So far so good. I will update this thread as I get more data.

Your numbers are pretty low, so personally I think it’s the account itself. You don’t want to block webrtc when creating them (potential for lowered trust of the account).

What are you using for sources?

@Tacos hit it on the head with the scraper account, but that’s just one source, you need to mix them up a bit.

since i started getting the API blocks I switched one of them to “follow followers of target accounts” but this alone didnt seem to make much difference.

depending on how my tests go, I will probably try a scraper account next

You mentioned resetting the device etc. That would require another PV or EV. Resetting device ID’s should be the last thing you should do (IMO). Lowered trust score is very hard to get rid of.

It took me months to get rid of them on a client account. She joined July or August of last year and had her account banned for changing her name to a trademarked name. Once she was unbanned it was blocks everywhere. I had to have super minimal actions and many days of rest. I used a lot of the other functions to bring it’s trust up, but it never fully recovered 100% before she off boarded.

why do you recommend adding hashtags as source?

I typically dont get great follow back ratios with them, will it somehow increase trust or address API issue?

why do you recommend adding hashtags as source?

@HenryCooper will give you some insight.

Try to remove all like filters and start liking generic hashtag posts that are related to each other. The amount of API calls and possibly your API call VS actually like endpoint request ratio might be an issue. Example: #kitty, #cat, #cute OR #car, #audi, #bmw etc. I hope you see and understand the pattern.

Yes! See, if that helps. Sometimes also heavy targeted follows can cause blocks. Remove all filters and follow users that post in hashtags like: cat,kitty,cats,cute (as long as they are related). See if that helps with the blocks.

Mostly it will address API issues. I would recommend not allowing the account to use the EB for any reason. Using the browser to like and follow is a “bandaid” and you need to get to the source of the issue.

Even if hashtags don’t produce a great followback you should see a difference.

Rest the account, change the settings and sources. I would really recommend a scraping account, even if just to test.

Just going throw this out there, but I think you may be hitting blocks due to the frequency of your actions.

Constant searching and following every 1-4 minutes is basically a neverending usage of the API every hour that you’re running things which would trigger the “Please wait a few minutes” error, or an API block from flooding the server with requests.

Following more at one cycle spread out over longer gaps will spam the servers less. ie. 20 per 30-40 minutes instead.

I don’t do liking via Jarvee at all as it doesn’t seem to make much difference and like blocks are frequent.

If using like after follow, make sure you are staying around 50 and under per hour. It’s very easy to go over.

We grow IG accounts. Have been doing this for nearly 3 years. I just got this email from a client about a notification she received from IG: “I should have screen shot it but it was something a little different stating that “it appears you are conducting business with a company that produces follows for you” or something along those lines. “Change your password or your account will be taken down””…Anyone familiar with this? Thanks…We are only performing f/uf on here account. She just signed up, so the actions were very conservative.

And more if you search. Ask her to include a screenshot or anyone else who gets them. People freak out and exaggerate what they received from IG.

Even regular people are getting that message so there’s a good chance it’s just a BS notice. She could have used Hootsuite or planoly or something along those lines in the past. Anyone can get that message honestly.

Thanks. I thought she got he typical notifications that IG has been sending out, but that’s when she sent me the message I pasted above. I will check other thread more and see what’s being said. Thanks again.

I’ve not received the message nor have any of my clients. But there appears to be 2 different ones.

We received all the head aches that came with recent notifications, but this one is very concerning. This is the only client out of 1200ish that said they received this notification, and she just received it within the last 2 hours. This client works on ppls faces and only has this one IG account(to our knowledge). It appears I’m still crawling in here, so that link you sent me is not allowing me to view it. Appreciate you connecting with me.